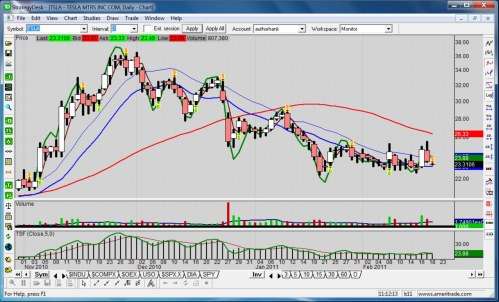 Tesla stock is still selling off, after its recent quarter and year end report touched with positive future statements about the S-Drive being on schedule for mid-2012 delivery.
Advertisement

From a technical analysis chart perspective, Tesla (Nasdaq: TSLA) is still under its 50-day moving average, the quintessential measuring stick of price dynamics.

From a fundamental perspective, the Tesla news release related that Tesla Motors, Inc. (Nasdaq:TSLA) preliminary financial results for the quarter and year ended December 31, 2010 were unaudited, but revenues for the fourth quarter of 2010 were $36.3 million, a 16% increase from the $31.2 million reported in the prior quarter. Gross margins improved to 31%, up from 30% for the prior quarter.

The company also reported there is “strong sequential revenue growth," gross margin improvement, and, more important, the Model S Alpha Drives are on schedule; meaning, the program is on Track for mid-2012 deliveries

Tesla has had the proclivity the past few months, though, to sell off for days, then follow up with high-volume up day. Two days in particular stand out for this bullish turn-around day phenomenon. That happened as recently as Feb. 8th and Feb. 16th.

Both may have seemed like the traditional end of selling, but more buying failed to materialize. Especially note the very next day the bears took charge, albeit on low volume.

Simple fact is, there are no new buyers coming in to this stock to sustain any upward momentum; meaning, TSLA has no staying power since its highs in the mid-30s last November. So, this might be a trading stock, but not a very long-term investment; at least not yet.

Then again, it is the nature of start-ups to experience uncertainty. Fact is, Tesla is a relatively new automaker, and few of those really make it.

Think back to DeLorean and even later to Tucker. Likewise, there were those who scuttled every move that both made; especially Tucker who brought us aircraft quality disc brakes. Heck, even GM scuttled its own Saturn by starving it for product until too late.

Having viewed the aluminum body structure in detail and talking with Tesla engineers at 2011 North American International Auto Show, I dare say I was impressed. There is certainly no lack of intelligent design or drive at this company, in my opinion.

The electric drive is solid. Toyota may have had some problems, but they’re not ignorant of technical value.

Still, wise investors should be asking themselves, can this company make it, even with an alignment with Toyota?

Some wonder, what will happen if Tesla can't deliver the new S model on time? What if a Tesla model faces similar recall issues Toyota? So? Saturn experienced the very same questions. I know, because I was there.

Simple fact in the auto industry is this: It’s not if you will get sued, just a matter of when. Elon Musk is no idiot. He’s quite aware of the risks; and so must be his investors.

According to a recent seekingalpha.com article, if anyone can pull off success from the clutches of overhanging danger it just might be Tesla CEO Elon Musk

Still, question is, should you buy TSLA or watch this company from the sidelines?

It’s true that Tesla's recent quarterly revenues were only about $36 million, and is losing many millions in a quarter. It’s also true that Tesla investors will need to see incredible revenue and profit growth for many years for it to be able to grow into the over the $2 billion market value it presently has.

Nonetheless, the market revalues companies all the time in light of risks and future potential. From the chart, it seems the market is saying it’s not ready for prime time. Then again, GM stock isn’t exactly making rocket moves to the moon either since its IPO last November.

And Panasonic, which completed the purchase of 1,418,573 shares of common stock for $30 million, is continuing its development with Tesla of next generation battery cells designed specifically for electric vehicles.