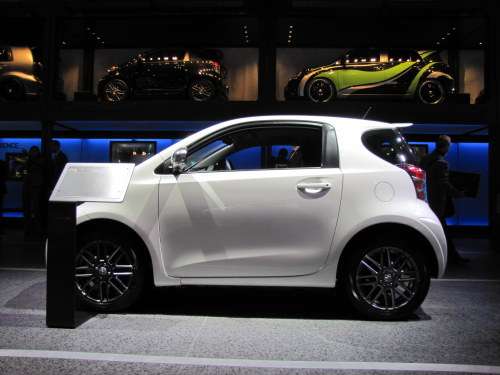 There’s more behind the increased number of small cars appearing at the 2011 Detroit Auto Show than any year before, and far more than just the threat of $5 gasoline that may or may not occur.
Advertisement

Few realize just how leaders in the auto industry really think behind the scenes. Ironically, sometimes they don’t; hence the bankruptcies and lack of vision. At other times, the auto industry talks and walks like a sly fox; meaning, it knows precisely what it wants to do.

One of those bucket-list things that the auto industry definitely wants to do is meet America’s fuel economy standards for 2016. Witness the fact that every automaker at 2011 NAIAS has at least one, new small-car entry. Beyond 2016, they know it’s only going to get tougher, and are hoping for fuel cells and hydrogen. What about after?

Actually, 2016 is an official obligation, as a result of a comprehensive agreement with the federal government, state regulators and environmental groups, whereby the auto industry must meet a 35.5 mpg fleet-wide average; but note the words, “fleet-wide average.” No matter how the fleet is dispersed via the segments, it is the public, not the automakers, that determines where sales will focus; and that’s often a moving target.

So, the industry is hedging its bets against an economy that is still hurting, high unemployment, rising energy costs except for natural gas, and government mandates. So, despite all the rhetoric about a green planet and conservation, the industry is simply concerned for its own welfare; but, hey, who isn’t?

After 2016, the regulations are expected to get even stiffer. California is trying again to get its own way. Even the Obama administration has issued a preliminary proposal to require automakers to increase the corporate average fuel economy of cars and lights trucks between 47 mpg and 62 mpg by the 2025 model year.

The problem is that larger cars and mid-sizes need to get much better mileage than what the very best are getting right now at 2011 NAIAS. Don’t be fooled by the highway numbers. It’s the average of city and highway that counts, because that is how we drive. The other problem is that larger vehicles are not cheap by any means; and electrification is not making them cheaper.

We already have internal combustion engines (ICE) that have multiple valves, direct fuel injection, variable valve and cam timing, not to mention twin turbos. Fact is the efficiency has gone up significantly, but still not enough. So, what’s left that will meet the mandates and allow the power to motivate a larger vehicle?

Obviously the industry will have to find another dimension of ICE power plant technology that will meet the balance of small engines and larger cars plus outstanding mileage. What’s left? GM has HCCI (high compression combustion ignition). Europe leans toward clean diesels with expensive post processing of exhaust.

Then again America does have natural gas and lots of it. Still, the infrastructure is best served by using much smaller amounts of gasoline and nat-gas. Yet, the engine technologies still might not make it, especially post 2016.

Enter the split-cycle engine technology. Nobody in all the years has seriously done this, splitting the cold intake-compression from the hotter power-exhaust segments of the four cycle engine; that is, except two companies: the Tour engine out of Israel but without much fanfare; and the American born Scuderi Engine Group, winner of innovation at SAE 2010.

The main advantage of the Scuderi is its ability to be configured with the least amount of tooling change into an air hybrid.

Think on that until next week, as there is supposed to be an announcement regarding the future of this engine technology.

john1212 wrote on May 13, 2011 - 7:15am Permalink
Consumers are getting serious about buying small cars these times...More people are buying small and more fuel efficient cars to offset rising gas prices.small cars are compact, convenient and attractive. <a href="http://www.topcarsdeal.com/" title="Used car deals">Cars for sale</a>
Concord locksmith wrote on August 30, 2011 - 3:17am Permalink
Your web-site is simply definitely the best . Over-all conception of the website is just spectacular . <a href="http://www.PrimeConcordLocksmith.com">Concord locksmith</a>
Julie Watson wrote on August 31, 2011 - 2:11am Permalink
Small cars are one of the most fastest growing demanded cars all over the world. This small car is really amazing and that too with such a great mileage. I am sure this car will rock and grab good market share. <a href=http://newbikes.indiandrives.com/ rel=”follow”>Buy New Bikes</a>
Mumbai Escorts wrote on April 10, 2012 - 5:05am Permalink
awesome car pics........:)
Lalit Kumar wrote on April 10, 2012 - 5:07am Permalink
nice one