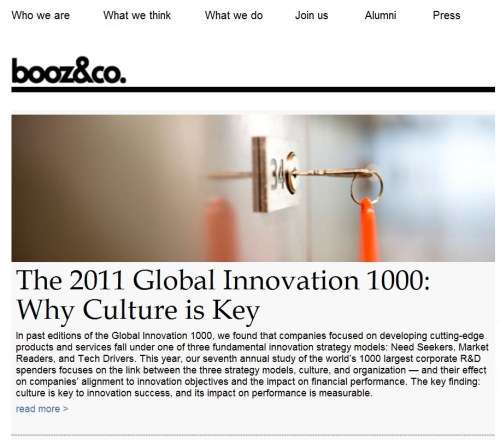 Corporate culture as important as innovation per Booz & Company

Auto sector stock companies take note: No matter a firm's innovation strategy, Booz & Company reports that culture is key to innovation success, and its impact on performance is measurable.
Advertisement

Booz & Company’s Annual Study shows that spending more on R&D won’t drive results. The most crucial factors are strategic alignment and a culture that supports innovation. Can you say, Apple, Google, Facebook? And what about the Saturn philosophy?

So, must reading for automakers has to be The 2011 Global Innovation 1000: Why Culture is Key written by Barry Jaruzelski, John Loehr, and Richard Holman for Booz & Company, a leading global management consulting firm, helping the world's top businesses, governments, and other institutions.

According to the website for Booz & Company which avails the annual Global Innovation 1000 study, now in its seventh year, reveals that year after year, certain companies succeed in producing innovative new products and services, and in so doing generate superior financial results.

According to an excerpt from the first page of the report, culture is described as
“the organization’s self-sustaining patterns of behaving, feeling, thinking, and believing.” And success is tying them all together.

Every company among the Innovation 1000 follows one of three innovation strategies — need seeker, market reader, or technology driver. While no one or another of these strategies offers superior results, companies within each strategic category perform at very different levels. And, no matter a firm's innovation strategy — culture is still key to innovation success, and its impact on performance is measurable.

Specifically, the 44 percent of companies who reported that their innovation strategies are clearly aligned with their business goals —and that their cultures strongly support those innovation goals — delivered 33 percent higher enterprise value growth and 17 percent higher profit growth on five-year measures than those lacking such tight alignment.

Booz & Company also asked innovation leaders participating in the survey to name the companies they considered to be the most innovative in the world. For the second year in a row, Apple led the top 10, followed by Google and 3M.

This year, Facebook was named one of the world’s most innovative companies, entering the list at number 10. In a comparison of the firms voted the 10 most innovative versus the top 10 global R&D spenders, Booz & Company found that the most innovative firms outperformed the top 10 R&D spenders across three key financial metrics over a 5-year period — revenue growth, EBITDA as a percentage of revenue and market cap growth.

For the record, Booz & Company has always been known for its foresight and impact. Known best for their deep industry and functional expertise across public and private sectors, their influential global studies and books include the management magazine, strategy+business. The group developed the concept of human capital in the 1940s, product life cycle in the 1950s, supply chain management in the 1980s, smart customization in the 1990s, and organizational DNA in the current decade.

You may download a copy of the 2011 Global Innovation 1000: Why Culture is Key here: http://www.booz.com/media/uploads/BoozCo-Global-Innovation-1000-2011-Culture-Key.pdf

Also for the record, this reporter has known about the critical importance of this culture aspect for many, many years, having worked in the corporate world of automotive for over 39 years, in addition to being a team member of the Saturn Corporation, the wholly-owned subsidiary of the old General Motors. It was during those years that I researched and wrote “Perfecting Corporate Character.”

Tsingshan's Threat to Tesla: EV Maker Is In Battery Crosshairs
Tesla-Funded Research Reveals One of The Biggest Mysteries of EV Battery
END_OF_DOCUMENT_TOKEN_TO_BE_REPLACED