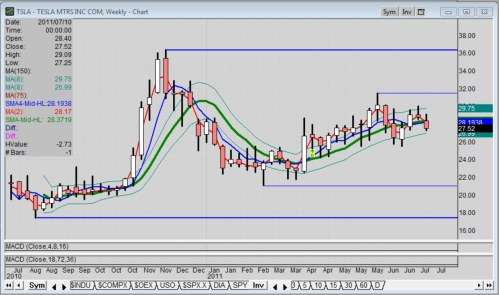 Despite the high tech electric propulsion and the lightweight of the aluminum body of the Tesla S Model, Tesla Motors stock is under plenty of pressure by short sellers. Question is, what does this mean for investors?
Advertisement

[Market Close Update: TSLA closed at 27.58] But based on the short-interest ratio, Tesla (Nasdaq: TSLA) stock still has about 10.6 days to cover all of the outstanding short positions.

Stocks with high short interest are often very volatile and are well known for making explosive upside moves, known as a short squeeze. Stock traders will often flock to such stocks for no reason other than the fact that they have a high short interest, and the price can potentially move up very quickly as traders with open short positions move to cover.

In the case of every high, short-interest stock like Tesla, high short interest can mean one of two things. The shorts are right about the fundamental outlook; so the stock is being looked unfavorably and will go down. Or the short sellers are wrong, and any upside news will literally squeeze them into buying back their shares, thus exacerbating the move to the upside. This is an indicator of upside potential in a stock and the higher this number, the more powerful the upside potential a stock has if a short covering should be triggered.

Which camp Tesla stock is really in is up for debate

On the fundamental side, Tesla is not making any money yet.

On the short-interest side, HighShortInterest.com provides a convenient sorted database of stocks which have a short interest of over 20 percent; and Tesla stock is on that list. Additional key data such as the float, number of outstanding shares, and company industry is also displayed.

And according to an article at Investorplace.com by Tom Taulli, author if “All About Short Selling” who also has an upcoming book called “All About Commodities,” Tesla will need to demonstrate that it can develop a car for masses. The problem is that other rivals, such as General Motors Company (NYSE: GM) and Nissan, are doing the same thing. And, they have the advantage of huge distribution, scalable operations and mega brands.

As a former designer within the industry and now a trader, I tend to agree with his assessment. However, this does not take away from my respect for the Tesla technology, the product development and the people at Tesla. My own interview with Tesla engineers at the 2011 North American International Auto Show was quite positive. Read: Tesla Model S illuminates aluminum-body structure at 2011 Detroit Auto Show

Then again, trading stocks is not a personality game. It’s all about earnings and earnings potential. And Tesla still has a long row to hoe.

Nonetheless, I especially like its alignment with Toyota. And I wonder how much these short sellers are overlooking that fact as the summer earnings season is upon us.

That means, any positive news could drive the stock up; and, if too much, could squeeze the shorts into buying back their shares. This could cause a breakout to the upside. Note my extensive use of the word, “could.”

The weekly chart above of Tesla stock does not show a stock in any great distress, in my opinion. It’s trading literally near the middle of past support and resistance, its major high and low, which is just above its mid-point of 25.15.

Should you buy Tesla stock and hope for some good news to squeeze the shorts? Or should you go with the shorts and buy a put option? Or go long the stock; or sell a put option as you wait for a lower price?

Just be apprised that Tesla has lost money the last two quarters, but each time less than the analysts expected. And each time that happened, the stock drifted up, not down.

I cannot say for sure, but a short squeeze has a better degree of probability than a fall to extreme lower depths if the company should better the estimates again. Of course, the market crowd always knows better, but only lets us know as it happens or after the fact. All we can do ahead of that is to think and trade according to our own assessment of probabilities.

For the record, I do not like to trade stocks that I write about, but in the interest of full disclosure, I do have an open order to sell some Aug 25 Put options based on the pattern and price support I see on the daily chart (not shown). I may or may not get filled at my price. In this case, I want to sell the put option for income as high as possible, then buy it back later at a lower price. [Market Close Update: As of Friday's close, my put selling order was still unfilled. Will reassess Monday morning]

In case you did not recognize it, that’s a bullish trade without having to buy the stock at today’s price near 27.42; and it looks for a possible downturn followed by news that might induce a possible short squeeze. Bottom line on this strategy is, I get paid to wait for a lower price entry.

If the stock closes below 25 by option expiration, though, the stock will literally be put to me; meaning, I will have to buy the stock at the 25 strike. However, the income from selling the put option provides some downside cushion. And if the options expire with the stock above 25, then I will keep the income.

Anonymous wrote on July 20, 2011 - 5:38pm Permalink
Did you see that short squeeze that happened today?