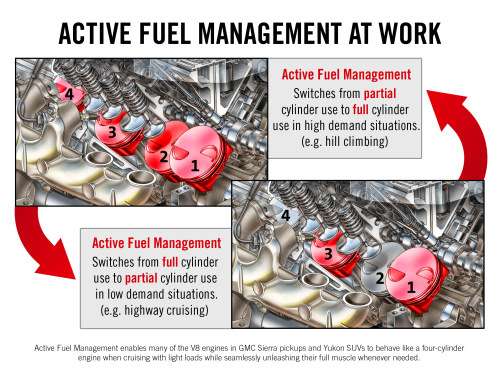 Fact is, it takes a powerful and capable engine to pull a 10,000-pound trailer or carry a nearly 2,000-pound payload. Another fact is, that power is not needed when the cargo is left behind.

Enter Active Fuel Management (AFM), the technology that helps drivers get more miles out of a gallon of gas.

AFM enables many of the V8 engines in GMC Sierra pickups and Yukon SUVs to behave like a four-cylinder engine when cruising with light loads while seamlessly unleashing their full muscle whenever needed.

Engineers pioneered the concept of variable displacement engines, but the idea really came into its own with the development of modern electronic engine management systems and sequential fuel injection.

Under light load conditions when only a fraction of the available power is needed to keep the vehicle moving, the fuel delivery to four of the eight cylinders is switched off and a solenoid system collapses the valve lifters to reduce the pumping losses and improve fuel efficiency. As soon as the vehicle begins climbing a grade or the driver needs to accelerate to complete a pass, those cylinders are automatically and transparently re-enabled.

According the latest GM news release on the GMC Sierra and Yukon Hybrid models, engineers used the ability of the sophisticated two-mode system to provide electric drive assist at highway speeds so the 6.0-liter Vortec V8 can be kept in four-cylinder mode longer. Where a standard pickup or SUV might switch back to eight-cylinder mode while ascending a grade, the hybrids use their electric motors to maintain speed and keep four cylinders turned off, helping these trucks to achieve best-in-class EPA estimates of 20 mpg in the city and 23 mpg on the highway.

With EPA estimates of 15 mpg city and 22 mpg highway, the AFM-equipped 2011 GMC Sierra XFE is the most fuel efficient V8-powered, conventional full-size pickup in America. AFM is also currently used on the standard 5.3-L Sierra and Yukons with the 5.3, 6.0 or 6.2-L V8 as well as several Chevrolet pickups and Chevrolet and Cadillac SUVs.

“Active Fuel Management offers Sierra and Yukon owners the best of both worlds – all the capability expected of a full-size truck or SUV with better fuel economy,” said Jordan Lee, global chief engineer and program manager for small block engines.

Be apprised that new engine technologies are out there that will eventually yield even greater efficiencies. For one, the external combustion steam engine developed by Cyclone Power (PINK: CYPW), and being used by Raytheon (NYSE: RTN), would be a great option for future trucks.

Furthermore, the use electric hybrids could be replaced by air and hydraulic hybrids. To maximize this end of the tech curve consider the split-cycle engine developed by Scuderi. It’s scalable, capable of using diesel, nat-gas or gasoline, plus its capable of being hybridized for recapturing energy; but the best is the Miller Effect from turbochraging.

michaelvettel wrote on October 7, 2011 - 8:44pm Permalink
GMC have made a lot of trucks that runs efficiently this time they engineered Active Fuel Management system to its truck fleets like the Yukon and Sierra that has V8 engine and other <a href="http://www.stylintrucks.com/vehicles/gmc.aspx">GMC truck parts</a> that runs with the same engine variant.