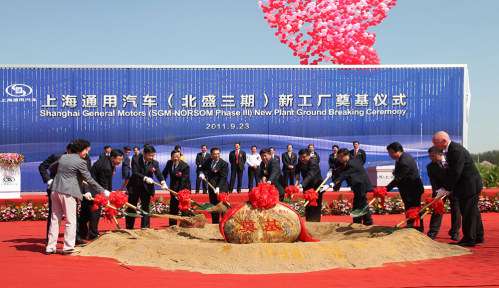 This means General Motors Company (NYSE: GM) which traces its roots back to 1908, now has 11 joint ventures, two wholly owned foreign enterprises and more than 35,000 employees in China. GM and its joint ventures offer the broadest lineup of vehicles and brands among automakers in China.

Located in Shenyang’s Auto City Industrial Park, the new facility represents an investment of RMB 7 billion. It will have an annual production capacity of 300,000 vehicles and 450,000 engines when it begins operation in 2014. Its products will be sold by Shanghai GM.

Taking this news to an extreme, in a way the American taxpayer is also part owner in these Chinese joint ventures, as the U.S. government still holds a large position in GM stock.

According to the latest General Motors (NYSE: GM) news release, the new plant covers an area of nearly 2 square kilometers. It will include press, body, paint, general assembly and powertrain shops as well as support facilities. It will adopt many of the same world-class manufacturing, environmental protection, quality and management systems as other GM plants around the globe. Like Shanghai GM, it is expected to be lean, agile, flexible and modular.

“The new plant is an important component of GM’s five-year plan for continued success in China,” said Kevin Wale, President and Managing Director of the GM China Group. “It will enable us to keep up with the rising demand for our products across China. At the same time, it will contribute to the growth of the economy in northern China and the region’s automotive base.”

Of course, GM has held joint ventures with competitors before. The NUMMI plant in California is a case in point, which was recently sold to Tesla Motors (Nasdaq: TSLA) via Toyota Motors (ADR: TM).

To support the new project in China, though, an automotive parts and logistics zone is being planned by the Shenyang government in the Auto City Industrial Park.

And elsewhere in China, passenger cars and commercial vehicles are sold under the Baojun, Buick, Cadillac, Chevrolet, Jiefang, Opel and Wuling brands which makes these ventures a success. In 2010, for example, GM sold more than 2.35 million vehicles in China, which represented 28.8 percent growth over the prior year. It has also been the sales leader among global automakers in the market for six consecutive years.

As an investor, this writer must ask the following question: Since most joint ventures eventually split up over time, will these ventures become competitors for GM in the global marketplace?

Anonymous wrote on September 26, 2011 - 10:23pm Permalink
WHOA-WHOA-WHOA did i read that right the government still owns a large portion of gm stock. now if gm paid their bailout money back like they say they did that would mean the government would'nt own any gm stock but if they do that would mean gm is telling the american tax payers a big fat lie but that can't be true [LOL] i've read tons of post by gm die hards that say gm paid their bailout money back and have been making huge profits afterall that uaw contract was about giving the gm workers their benefits and money they took away when they filed bankruptcy now that the company is profitable. HEY GM THE COUNTRY IS BROKE THE TAXPAYERS ARE BROKE PAY OUR MONEY BACK. all thats it move everything to china it will fit you perfect BUILD IT CHEAP recall it later....

LG's New EV Battery Plant Is a Welcome News for Tesla
Tesla Giga Berlin's New Hurdle: It's Not Only the Gov't, but Now Tesla Itself
END_OF_DOCUMENT_TOKEN_TO_BE_REPLACED