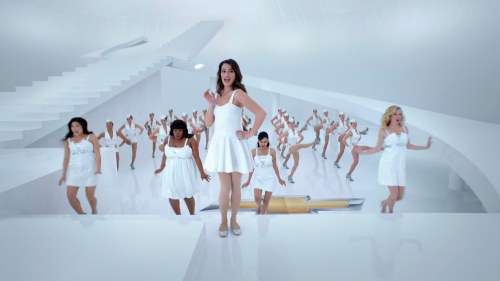 Chevrolet made its ad campaign a wrap on Sunday with a dreamy advertising tie-in during a special post-Super Bowl episode of “Glee,” the FOX hit musical comedy.
Advertisement

This looks to be a first for post-game connections for automotive advertising.

In addition to a total of about four game ads and the Chevy Camaro convertible being given to Aaron Rodgers as MVP, the Camaro convertible, Cruze, and Volt were featured in a dream sequence commercial in which the “Glee” cast sings “See the U.S.A. in your Chevrolet.”

This brought to life for a new generation the classic jingle popularized by Dinah Shore in the 1950s.

According the GM news release, Joel Ewanick, global chief marketing officer of General Motors said, “We saw this as an opportunity to cap off an unprecedented day for Chevrolet. The ads shown during the Super Bowl highlighted key Chevrolet products in a traditional way, but the ‘Glee’ tie-in is a new realm for integration with a hot show on the big day.”

GLEE appears to have been the right collaboration. It is this season’s No. 1 entertainment series among Adults 18-49, Adults 18-34 and Teens boasts critical acclaim, the Golden Globe Award for Outstanding Comedy Series two years running. Just in its sophomore season, GLEE airs Tuesdays (8:00-9:00 PM ET/PT) on FOX.

“Conversations with Starcom began upon the announcement that ‘Glee’ would have a post-Super Bowl episode, and from that point, the focus was on elevating Chevrolet and ‘Glee’s’ long-standing partnership to a new level,” said Jean Rossi, President, FOX One and executive vice president, sales, FOX.

The two-minute Chevrolet spot aired during the special “Glee” episode with silver Chevys on a white background in a scene reminiscent of a 1930s Hollywood musical. The cast sings and dances around the Chevys while performers dangle from the ceiling by white sheets.