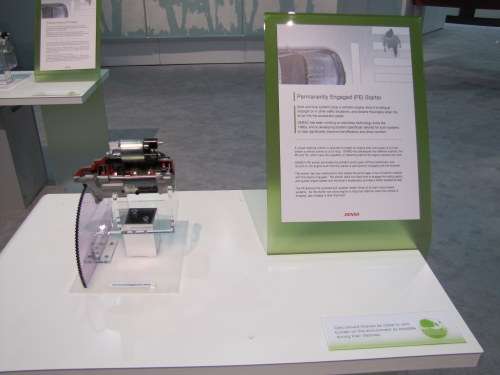 Amid the many technology gains displayed at the 2011 NAIAS in Detroit, few realize how many challenges are involved in designing the stop-start systems to save fuel.

Denso, for example, posed a Tandem Solenoid (TS) starter, the same size as a conventional starter, capable of many more engagement and cranking events because the design reduces engagement friction by 90 percent.

The second (shown) was a Permanently Engaged (PE) design with the pinion gear in permanent engagement with free-wheeling flywheel ring gear coupled to the engine via a clutch for faster starting of stop-start systems.

A one-way clutch normally keeps it freewheeling when the engine is running. When the engine is stopped, the clutch couples the flywheel to the crankshaft, allowing the starter to directly energize and restart the engine more quickly.

As you can see, stop-start systems, also called idle-stop systems, may seem simple in wording, but they’re complex in reality. Furthermore, they’re costly, because they require trade-offs beyond the starter.

For the record, engine idle-stop systems have been used to improve fuel economy and lower emissions in Europe for years. Truth is, Europe has had higher fuel prices, and their emissions regulations and regulatory drive cycles favor the technology and forces its use.

Still, stop-start for conventional gasoline engines on U.S. models are a year away from any meaningful production; and, even there, issues remain.

Regardless of the starter system, at issue is making the stop-start process seamless to the driver, especially the micro-hybrid driver. That means any delay beyond 0.5 seconds is deemed unacceptable, especially for automatic transmissions without any hybrid electric power.

Fact is, seamless restart is much easier with a high-voltage, full hybrid, where the car is empowered to roll via the electric drive, which further buys time for the engine to restart with the help of an integrated starter-generator.

When applied to a micro-hybrid without that electric motor drive, auto owners still expect the engine to start running almost the instant the driver’s foot presses the accelerator.

For the record, manual transmissions allow the stop-start system more time to operate, because the restart sequence occurs while the driver’s right foot is lifted off the brake pedal, the left foot depresses the clutch, and the car is shifted into gear.

Automatic transmissions, on the other hand, require much faster restarts as that time-eating, foot-clutch sequence is missing. For example, Ford realizes the expectations of its customers and will introduce a stop-start for next year that promises 0.3 seconds for restarts; as opposed to 1.5 seconds or longer for a conventional system, because of the auto transmission.

Another major issue is related directly to the choice of fuel injection for engines with stop-start. Fact is, there’s only one that is acceptable, and it’s the direct injection (DI). Reason is, unlike port fuel injection, direct injection eliminates the time delay for fuel delivery, because the fuel-air charge does not have to travel from the port into the cylinder. The closer to instantaneous delivery the better.

Wait there’s more. Lest you deplete the battery for micro-hybrids from all the stopping and starting, engineers have to include ultra-capacitors to store enough energy to assist the battery to deliver sufficient power to the start motor. After all, the battery is supplying power to the rest of the vehicle’s power demands.

Still, thanks to the ingenuity of auto engineers, stop-start is still coming to America, in both full hybrids and micro hybrids.

LG's New EV Battery Plant Is a Welcome News for Tesla
Tesla Giga Berlin's New Hurdle: It's Not Only the Gov't, but Now Tesla Itself
END_OF_DOCUMENT_TOKEN_TO_BE_REPLACED