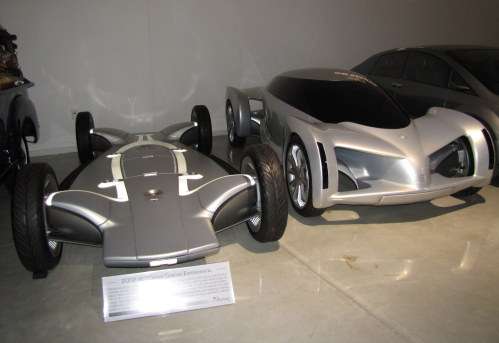 More information is pouring in, as Fuel Cell and Hydrogen Energy Association (FCHEA) takes full advantage after its visionary move to merge the National Hydrogen Association with the US Fuel Cell Council. Their combined strengths will now attempt to move this industry forward by meeting in Washington, DC from Feb 13 -16.
Advertisement

This new conference, formerly known as the NHA Hydrogen Conference and Expo, will openly display a powerful alliance which will make the fuel cell part of the energy equation, and will help the propulsion systems of future vehicles, like the ones shown in the picture at the GM the Heritage Center in Sterling Heights, Michigan, come to fruition.

According to the fuelcellandhydrogenenergy.org website and email marketing, Fuel Cell & Hydrogen Energy 2011 has the mark of a powerful event. Phrases like, “absolutely First-Class Conference;” “the premier event for hydrogen fuel cell research in the nation;” permeate the website’s feedback from previous years.

The 2011 conference, though, is different mainly because of the merger. The goal is to take advantage of the momentum and history of both industries so as to elevate efforts to make fuel cell and hydrogen energy technologies an integral part of the clean energy portfolio.

Already, the team has put together the 2nd largest expo in the event’s history and there are still two months to go. Reports show they have attracted an unprecedented array of expert energy speakers from within and outside our industries.

Posters will be on display in the Expo Hall, where formal presentation times will be announced as they are finalized. The initial list is large and includes the following categories:

DOE announces up to $74M for fuel cell R&D
Projected fuel cell costs decline 81 percent since 2003
Auto industry turning more to outside research to fulfill technology needs
Is a hydrogen and internal combustion engine marriage in your future?