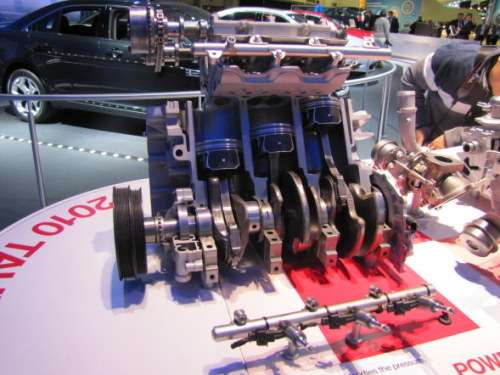 Is a hydrogen and internal combustion engine marriage in your future?

Not all follow-ups to news releases communicate proper emphasis, especially when it comes to Detroit and its technologies. Case in point is the National Renewable Energy Laboratory (NREL) media release on its website, which showcased a hydrogen-powered bus as representative of advance vehicle technologies. Deemphasized by most in the follow-up automotive press was the fact that the engine was internal combustion, not a fuel cell.
Advertisement

The picture shows a cutaway of a Ford engine taken at the NAIAS 2010 in Detroit. I'll explain its significance in a moment; it's relevant.

For the record, the link for the originating media report is as follows: NREL Hydrogen News .

Now, the fact that Ford was producer of the bus was not surprising. They‘re smart enough, successful enough, and people like their products. Their tech displays at NAIS, for example, are some of the best I have ever witnessed.

What was surprising, though, (again, because it lacked full automotive media emphasis, in my opinion) was that Ford produced this hydrogen-powered bus using a slightly modified internal combustion engine (H2ICE) with existing drive train technology, not an expensive fuel cell with expensive lithium-ion batteries and electric motors.

Normally, hydrogen is represented in the magazines and on the web as a fuel for fuel cells which power electric vehicles. Well, not all vehicles can be electric. Think heavy trucks here.

Furthermore, the media tends to lead the public to believe that the ICE will be replaced the moment that hydrogen becomes commercially available in mass quantities. That may happen in time. However, large vehicles like busses and heavy trucks require greater power and range than present electric-powered vehicles can deliver. In hybrid form, yes. In electric-only form, not in your present dreams.

Here’s the really good news: Only modest design adjustments are needed to switch the basic gasoline-powered engine to a hydrogen-powered engine. Modifications include alternate materials for valve seats and other parts that may become brittle when exposed to hydrogen. Think hydrogen embrittlement, a metal condition first discovered in aircraft and submarine parts, and tested even when I was working on airframe structures in the U.S. Navy.

Furthermore, these engine modifications are no more radical than those required for present ICE to handle high ethanol blends of fuel. Point: The expense is far less than those associated with a lithium-ion battery.

According to the original NREL news release, the real gains are as follows:
1) H2ICEs, as they are defined by the NREL, are highly fuel efficient; up to 25% more efficient than gasoline-fueled ICEs.
2) H2ICEs also have the potential for near-zero emissions, because the fuel contains no carbon, and doesn’t produce carbon dioxide or other carbon compounds.

The media’s automatic association of hydrogen with fuel cells has to be corrected. Not every vehicle will be able to use a fuel cell; that is, until the energy density of the batteries and motor magnets mature. That will take many years.

Hydrogen, if produced in economical mass quantities, could be used almost immediately, because vehicle modifications are so minimal. Ford and the NREL have already proven that.