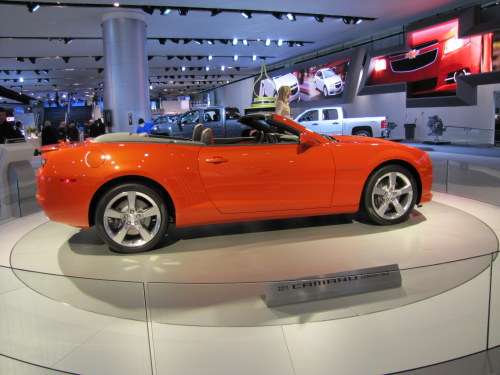 Chevy will present a Camaro Convertible to the Most Valuable Player from Super Bowl XLV between the Pittsburgh Steelers and Green Bay Packers.
Advertisement

Featured in a combination of in-game and post-game ads will be the Camaro, Cruze Eco, Silverado HD and Volt.

According to the official GM news release, this represents only part of a coordinated TV presence that continues into a special post-game episode of “Glee,” the FOX hit musical comedy. This post-game spot will promote an elaborate, longer-form Chevrolet ad, where the classic song “See the U.S.A. in your Chevrolet” plays a key role in the plot of the commercial.

According to Joel Ewanick, global chief marketing officer of General Motors, “Chevrolet has a lot of great news to share right now, and where else do you get to talk to 95 million Americans all at once? Chevrolet is using the biggest broadcast day of the year, all day, to talk about the Volt, the North American Car of the Year; the Silverado HD, Motor Trend’s Truck of the Year; the 42-mile-per-gallon Cruze Eco; and the best-selling Camaro.”

“This combination of commercials highlights today’s diversity of Chevrolet products, but each spot also tells a part of the overall Chevy brand story and provides additional evidence of how ‘Chevy Runs Deep,’” said Ewanick. “You’re going to see the Chevy story continue to unfold for a long time to come after Super Bowl XLV is in the record books.”

All of this year’s Super Bowl ads were created by Chevrolet’s agency of record, Goodby, Silverstein & Partners. Chevrolet advertising returns to the Super Bowl after a four-year absence.