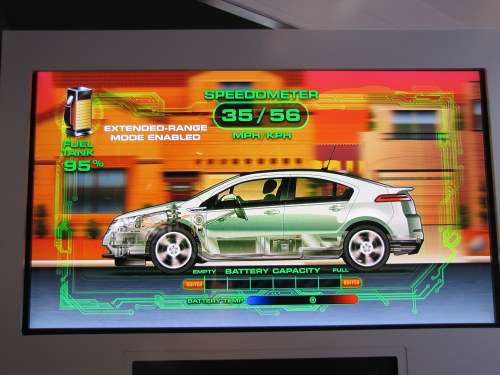 While the Edison Gold Medal for the Chevrolet Volt highlights the innovative engineering that resulted in the production of the world’s first electric vehicle with extended range capability, the OnStar Mobile App won the silver award as the 2011 Best New Product in the Transportation in the Remote Driving Aids Segment.
Advertisement

The Edison Awards symbolize the persistence and excellence personified by Thomas Alva Edison whose innovations and new product developments earned him 1,093 U.S. patents.

The recipients of the awards are voted on by roughly 2,000 members of the not-for-profit Marketing Executives Networking Group, America’s top executives and academics nominations based on societal impact, marketplace innovation, marketplace success and market structure innovation of new products launched in the past year.

Likewise, for OnStar, this was its second consecutive Edison award. OnStar’s Stolen Vehicle Slowdown, a technology designed to reduce dangerous high-speed chases, received a Silver Edison Award for Best New Product in the Technology category in 2010.

“Being selected as an Edison Award winner validates our drive to develop an all-new transportation solution,” said Tony Posawatz, Chevrolet Volt Vehicle Line Director. “Innovation has been at the heart of the Volt from its onset; from the development of the Li-ion battery to the drive unit and the driver connectivity.”

The Edison Gold Medal for the Volt highlights the innovative engineering that resulted in the production of the world’s first electric vehicle with extended range capability. With a full charge, Volt drivers can travel 25-50 miles completely emissions- and gasoline-free and then continue for several hundred more miles.

Complementing its groundbreaking propulsion system, engineers in the General Motors wind tunnel helped to develop the most aerodynamic vehicle in Chevrolet’s history. Reducing the energy needed to overcome air resistance added an estimated eight miles of electric range and 50 miles of extended range to the Volt.

Coincidental at the same ceremony Tuesday evening in New York City, the OnStar Mobile App won the silver award as the 2011 Best New Product in the Transportation in the Remote Driving Aids Segment. In the Volt, for example, the app allows users to control vehicle charging functions and view charge level, electricity rate tables and electric vehicle data along with other features.

The OnStar Mobile App allows users to access current vehicle diagnostics, such as fuel levels, oil life, tire pressure, miles per gallon or next scheduled maintenance. It also lets users control certain vehicle functions, such as remotely starting the vehicle, locking and unlocking the doors, and sounding the horn and lights.

OnStar recently expanded the availability of the app, certifying 14 Chevrolet, Buick, GMC and Cadillac vehicles from 2010, with more certifications expected in the future. The app has been downloaded by nearly 60,000 active users to date and has more than 1 million interactions.