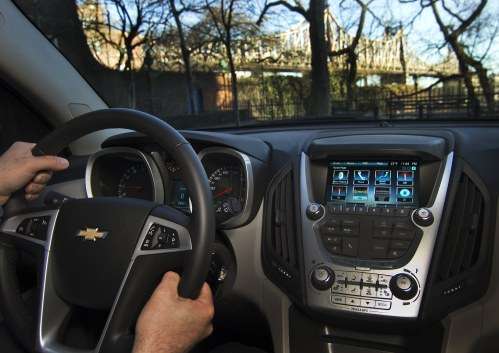 Coming soon to a Chevrolet dealer near you will be a higher level of in-vehicle wireless connectivity and customized infotainment options for the 2012 Chevy Volt and Equinox called My Link.
Advertisement

Think mobile communications technology that avails text messaging, e-mails, traffic advisories and other connected-car functions, except in a Chevy.

Further add to that mix the unmatched safety and security of OnStar. Now you have a direct competitive challenge to the Ford Sync infotainment system; and not a moment too soon, as Ford‘ been touting their system big time since last year.

As new details come out about the Chevy MyLink, you readily recognize the in-car infotainment package especially builds on the safety and security of OnStar; and that's pure technological evolution.

According to the GM news release out of New York, MyLink adds stereo audio streaming and wireless control of smartphones, building on the voice-activated Bluetooth hands-free calling capability already offered in most Chevy vehicles.

“Chevrolet MyLink is the next logical step for in-vehicle connectivity,” said Karl Stracke, vice president for Global Product Engineering. “MyLink leverages the mobile broadband capability and the sophisticated, online services made possible by today’s smart phones. MyLink retains all the capabilities of today’s entertainment units, including AM/FM/XM tuners, CD player with MP3 playback, auxiliary and USB inputs. But, Stracke says, “These are the essentials and we’re building from there.”

The marketing message is clear, though. The debut of Chevy MyLink extends the OnStar experience from safety and security to information and entertainment; and that’s significant.

By seamlessly integrating the capability of a smartphone into the vehicle so that hand-held phones may be safely stowed while driving, drivers, other drivers, passengers and pedestrians are safer.

Out of the major benefits, like enhanced hands-free voice control system powered by Nuance®, Pandora® internet radio and Stitcher SmartRadio® , Gracenote® which identifies music collections, the most powerful is the upgraded USB connectivity that adds flash memory capability to its USB device connections. This provides users with the ability to access approved applications that will make the MyLink system even more functional, while assuring that a driver maintains both eyes on the road and both hands on the wheel.

For the record, when OnStar debuted in 1996, it pioneered in-vehicle connectivity with the auto industry’s first embedded telematics system. It has grown since then from primarily offering automatic crash notification and security features to include remote vehicle diagnostics, turn-by-turn navigation and the ability to slow down stolen vehicles.

In November 2010, OnStar released a smartphone application for all 2011 Chevy vehicles that incorporated remote start, lock/unlock, and vehicle status checks as well as battery management functions for Volt owners. Volt owners also have the MyVolt.com website to provide those remote management features and other Chevy owners soon will have access to similar web-based OnStar services.
This coincides with another very powerful technology offered by GM, Powermat®. The combination of MyLink and OnStar will now be joined by the integration of the Powermat® charging system, thus eliminating the need for charging cords.

The news release says Chevrolet MyLink will be available beginning with the 2012 Chevrolet Volt and Equinox this fall before expanding to other vehicles in the Chevy lineup over the next 18 months.