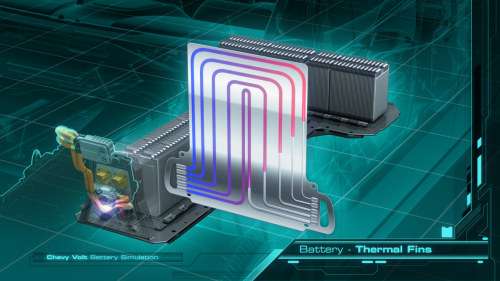 Every battery has its own temperature sweet spot that makes it ideal to transfer electron for power; so the Chevrolet Volt uses fins designed by Dana Corp to keep its pack within a 2 degree centigrade spread.
Advertisement

Great care has been taken to keep the pack at just the right and even temperature in all weather conditions.

According to the GM Media Release, the Volt’s ability to operate gasoline-free on a day-to-day basis and carry an eight-year/100,000-mile battery warranty is due to active thermal management of the advanced lithium ion battery pack.

Fact is, there is so much care given to the lithium-ion battery pack, that engineers of the four-seat Chevrolet Volt electric car often refer to the 435-pound battery pack as the fifth passenger.

Simple fact is, battery performance, regardless of its chemical make-up, is subject to temperature variations. If too cold, the packs are reluctant to release electrons. On the other hand, batteries that run too hot can suffer a significantly shorter life.

“Every battery has a temperature sweet spot where it provides the optimal blend of power output, energy capacity and long life and we keep the Volt right on that target,” said Bill Wallace, General Motors director of Global Battery Systems.

For the record, the Volt’s T-shaped battery pack consists of 288 individual cells arranged into nine modules. Plastic frames hold pairs of lithium-ion cells that sandwich an aluminum cooling fin. It is the design and construction of that aluminum plate that is critical to ensuring an even temperature distribution.

Key to temperature management is ensuring no hot or cool spots across the flat, rectangular cell. The Volt battery pack has its own cooling circuit that is similar to, but independent from, the engine cooling system.

Dana's battery cell cooling technology is manufactured using a cost-effective, proprietary clean nickel-brazing process, which provides improved battery system durability. Made of lightweight aluminum, the cooling plates offer improved energy efficiency and are easily recyclable, contributing to the overall environmental benefit of the Volt, which was named the 2011 Green Car of the Year(R) and North American Car of the Year.

It is the thecarefully-designed grooves stamped into the plates form channels, however, that allow battery coolant that is pumped through the pack to flow over the entire cell surface.

The management system monitors feedback from 16 thermal sensors arranged throughout the battery pack to maintain a spread of no more than 2 degrees centigrade from the optimal temperature across the pack.

Lest anyone think the lessons of the EV1 have been lost, think again. Getting the battery temperature just right was a direct product of lessons learned from the EV1 and 15 years of testing fuel cell stacks.

GM engineers and researchers learned a lot about how to circulate coolant to maintain an even temperature distribution. Those lesson learned went straight into the cooling system of the Volt battery.