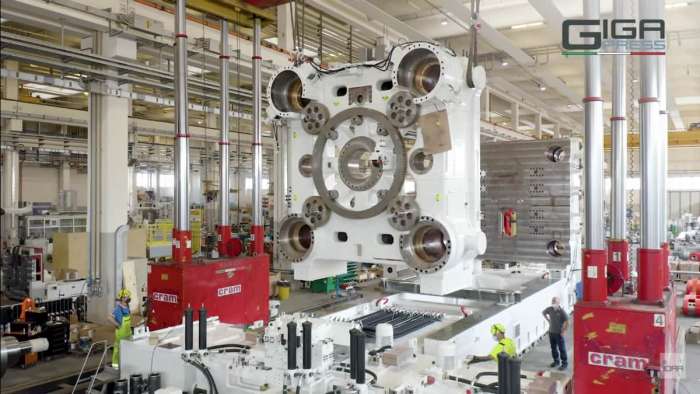 Tesla has pioneered a new way of building vehicles the world has never seen before. Tesla’s approach, unlike all other automakers that use robots to weld together the chassis of their vehicle, makes use of giant machines to basically “print” a large portion of its cars as a single piece.

This approach allows Tesla to decrease vehicle parts, complexity, and production time. while at the same time increasing the vehicles' stiffness, handling, and performance. And even more impressively, Tesla gets all these benefits at a cheaper price than the conventional way of building cars.

The machine that allows Tesla to make all these improvements is the Giga Press. The Giga Press is a large casting machine that takes in molten aluminum, applies pressure, and outputs large parts of the vehicle as a single piece.

Related News: Elon Musk Says The Structural Pack In The Refreshed Tesla Model Y Is Currently A “C” In An “A” Architecture

Elon Musk at his recent appearance at the All-In Conference has revealed that he got the idea to build the Giga Press by simply asking “how do they make toys so cheap”.

To build Giga Presses Tesla has contracted a company out of Italy called IDRA. And IDRA in its latest YouTube video has shown us a new, completed, and more powerful Giga Press.

Currently, to build the front and rear third of the Model Y Tesla uses a 6000-ton Giga Press. However, Tesla’s newest Giga Press has 50% more power and comes in at 9000 tons.

The new more powerful Giga Press, according to Elon Musk, will be used to construct part of the company’s upcoming vehicle, the Cybertruck. As of writing, IDRA has finished construction and testing of the 9000-ton Giga Press and is in the process of disassembling the machine.

Once the new Giga Press is disassembled, IDRA will then ship it to Giga Texas, where it will be reassembled and used to build the Cybertruck.

Until recently, we didn’t have any information regarding the differences between Model Y’s 6000-ton Giga Press and Cybertruck’s 9000-ton Giga Press. However, at Tesla’s latest Q2 2022 earnings call Tesla has given us some details about the new Giga Press.

During the call, Elon Musk and Drew Baglino, who is the Senior Vice President of Powertrain and Energy Engineering at Tesla, went into detail discussing all the improvements brought about to the Model Y by using a Giga Press.

The Tesla executives said the Model Y Giga Casting, which is the product of the Giga press, has allowed Tesla to decrease parts in the rear chassis of the Model Y from 120 welded-together pieces to 1.

Musk and Baglino also added that this has allowed Tesla to remove several robots from the Model Y production line and reduce the size of the body shop by 70%.

Tesla says the 4680 battery production is progressing, but not important for 2022. Here is what's important. https://t.co/GEY16V1OJJ
-
-#Tesla #Tesla4680Battery pic.twitter.com/iAOhd0RsS0

However, true to Tesla fashion, despite this incredible result, Musk and Baglino said they are working to improve the Giga Press even further and that Model Y’s Giga Casting is actually the first iteration of the product.

On the rear casting – the casting is already way better than the way it was done in the past where you've got 120 different parts that are welded together or bonded together with different alloys and then you have to put sealant in between all the various parts for water ingress and noise. So we're already way better than that with current casting, but there are still a lot of opportunities to reduce the master casting and also extend the casting to include more parts, as well as adapt the rest of the vehicle for the fact that there's a cast.

Yes, I was going to say the same thing, right? Like we're not just evaluating the pack and insulation either. It's the pack plus the body, the integration, do we have mass in the right places, we have the cost in the right places, and only just the right amount. And I think we've gone through one iteration. We're going to do another one with Cybertruck.

I mean, we're taking the learnings and doing. The next version hopefully is a B-plus in A architecture. That's certainly a target.

However, we will be sure to keep you posted if we learn more about Tesla’s plans. Until then, make sure to visit our site torquenews.com/Tesla regularly for the latest updates.

So what do you think? Excited to learn that the Cybertruck will get a next-generation Giga Casting? Also, what is your expectation for when Tesla will begin the first Cybertruck deliveries? Let me know your thoughts in the comments below.

John G wrote on July 24, 2022 - 5:05pm Permalink
Enjoyed your article, it was informative and well written. Re the Giga Press saving 120 welds and producing the back end in one piece. If someone backs into my Model Y and say punches a hole around the license plate do they have to replace the entire back end since it’s one piece? Getting Tesla parts after a collision or “fender bender” can take some time. It seems awkward and I think expensive to ship or stock for Tesla auto repair shops. Seriously this is a pretty large piece to manhandle. Can’t wait to hear a cost and availability for this money saving method.