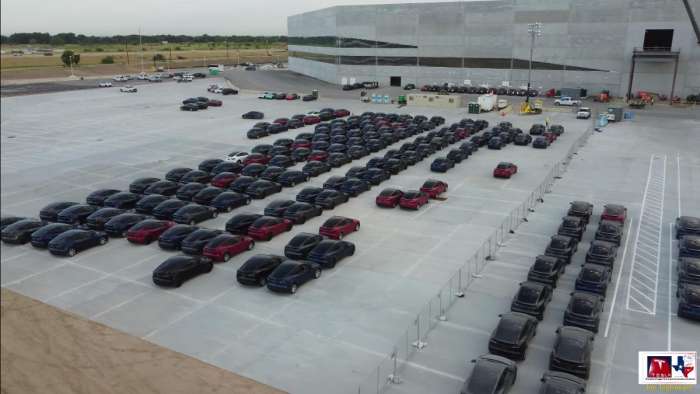 At Tesla's recently held second quarter earnings call, Elon Musk has given us more details regarding the refreshed Model Y's structural battery pack. Musk says the pack is not yet optimized and that it is a "C" in an "A" architecture.
Advertisement

Currently, Tesla has two versions of the Model Y out on the market. The first version is the one that Tesla has been selling since 2019 and that comes with the last generation of 2170 cells.

And the second version is the refreshed Model Y with the 4680 cells and a structural battery pack. Tesla first started selling this new version of the Model Y at the Giga Texas opening party back in April.

The refreshed Model Y incorporates all the breakthroughs Tesla shared at the company’s Battery Day event which together were supposed to amount to a 54% improvement in range, make the vehicle lighter and improve performance and handling.

This has caused a lot of confusion amongst the Tesla community, the subpar specs of the refreshed Model Y have even led some people to believe Tesla’s Battery Day presentation was a lie.

However, soon after the release of the Model Y AWD, Tesla sent out a letter to employees explaining why the refreshed Model Y, despite coming with the 4680 cells and a structural pack, has lower range and performance numbers than the Model Y Long Range with the last generation 2170 cells and non-structural battery pack.

According to Tesla, the main reason for lower specs is that the Model Y AWD is fitted with a smaller battery pack. This explanation, although it answers some questions regarding the specs of the refreshed Model Y, sadly raises even bigger questions.

According to the EPA, the Model Y AWD has a “fuel economy” rating of 123 MPGe (Miles Per Gallon equivalent). On its own, this number doesn’t mean much however, when we compare it to the Model Y Long Range, this is where the issues start to crop up.

The Model Y Long Range, with a 330-mile EPA range and a larger battery pack, has a fuel economy rating of 122 MPGe. This is practically equivalent to that of the refreshed Model Y which has a smaller battery pack, and a new cell and architecture that were supposed to make the weight of the vehicle even less.

So if the 4680 Model Y has significantly more energy-dense cells, and a smaller battery pack, why is it not more efficient than Model Y Long Range? Currently, this is the question going through the minds of Tesla watchers.

And lucky for us yesterday, at Tesla’s Q2 earnings call, we got an explanation from Tesla and Elon Musk that answers some of our questions.

One of the questions asked during the earnings call was “Elon noted that the 4680 plus structural pack is not yet optimized. Can you please share the general path of 4680 in structural packs in terms of cost efficiencies when compared to the traditional 2170 pack?"

And in his response Musk said “so structural pack where we get dual use of the battery cells as structure and as energy storage in the same way that an aircraft gets dual use of the wing as a fuel tank and as a wing is, I think, unequivocally, from a physics standpoint, the superior architecture. It's the A architecture. Now because it is new, we'll start off getting, I don't know, aspirationally a C within an A architecture.”

Musk and Drew Baglino, the Senior Vice President of Powertrain and Energy Engineering at Tesla, echoed similar sentiments when discussing the 4680 cells.

According to both executives, the 4680 cells hold a lot of promise however, Tesla is currently focusing on scaling production, as a result, in hopes of minimizing the number of new technologies coming at once, not all the breakthroughs announced at Tesla’s Battery Day that were meant to increase the energy density of the 4680 cells have been integrated into the batteries currently in production.

And if both the structural pack and 4680 cells have not yet been optimized to the fullest of their potential, then it explains why the Giga Texas refreshed Model Y has subpar specs.

Having said that, this doesn’t mean Tesla has given up on all the lofty promises at the Battery Day presentation. Yes, in order to reach production quickly, the EV maker has chosen to hold off on some of the breakthroughs of the new cell and architecture, however, Tesla still plans to roll out all the advancements in a step-by-step process.

As of now, outside of Tesla, it’s difficult to say exactly which parts of the structural pack and 4680 cells still need more work. However, we will be sure to keep you posted once we learn more about the issue.

So what do you think? Do you agree with Tesla’s decision to prioritize production simplicity over technological breakthroughs? Also, will you hold off on purchasing a Tesla until those breakthroughs are integrated into the vehicles? Let me know your thoughts in the comments below.

For more information: This Tesla Model Is The Fastest-Selling Used Car in The Market

Steve C wrote on July 23, 2022 - 4:19pm Permalink
Expecting delivery in Jan 2023 and was hoping a sw update was all it needed for improvement to show. Now the 12k+ price increase sounds ridiculous and perhaps should wait 2 more years. Or maybe everyone should cancel their orders so Tesla can shift their focus on actually delivering on promises on time and stop announcing unfinished work as a product.