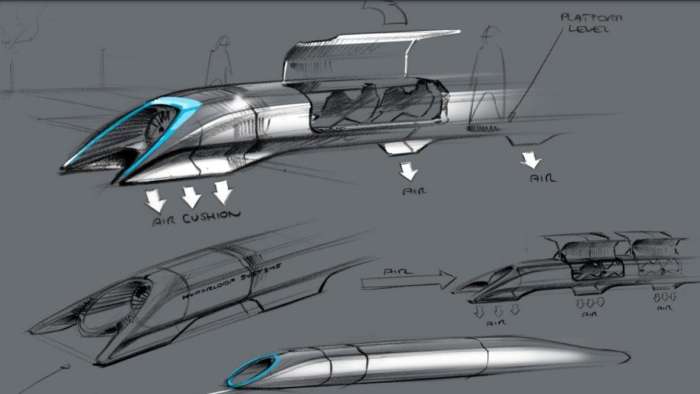 Musk came up with the Hyperloop concept in part in an attempt to find a better solution to a now-canceled multi Tens of billion dollars high-speed train project planned to link Los Angeles and San Fransisco.

In the Hyperloop White Paper, instead of using high-speed trains to connect the two cities, Musk proposes building low air pressure tubes that a pod could shoot through with minimal air resistance and friction at up to speeds of 700 mph.

In the 58-page paper, Musk goes into detail about how the system will work but, in a nutshell, Hyperloop pods will be fitted with electric air compressors fans at the front which will transfer air from the front of the vehicle to below it and to the back.

This has 2 important advantages. First, by removing air from the front of the pods, the compressor will decrease air resistance. Since air resistance grows to the cube of the speed of the traveling object at high speeds it becomes quite significant.

And second, by shooting this compressed air below the vehicle, it will create an air cushion which will significantly decrease friction. In addition, Musk proposed using onboard batteries to propel the fans and also imagined installing solar panels over the tubes to make the whole system self-powered and sustainable.

On paper, the idea seemed quite promising, however, at the time Musk announced that he will not be working to bring Hyperloop to life as all his time was taken by running Tesla and SpaceX full time.

After Musk's paper, several startup companies emerged working on the problem however, 9 years out and we still haven’t seen a single working Hyperloop system.

That’s where the Boring Company enters. Currently, the main focus of Musk’s tunneling startup is to significantly increase the speed at which tunnels are built while simultaneously decreasing their cost.

And as we have seen with The Boring Company’s Las Vegas Convention Center Loop, the tunnels, rather than Hyperloop, utilize Tesla vehicles to achieve this goal.

However, this apparently is only the first iteration of The Boring Company’s products, and as the tunneling startup grows, the Boring Company plans to venture into the Hyperloop.

According to Musk’s latest statement, we now have a confirmation that tunnels that utilize Teslas will not be the Boring Company’s only product. In a Twitter back and forth a few hours ago Musk announced “in the coming years, Boring Co will attempt to build a working Hyperloop.”

And for those who still doubt Hyperloop’s feasibility Musk added “from a known physics standpoint, this is the fastest possible way of getting from one city center to another for distances less than ~2000 miles. Starship is faster for longer journeys.”

In the coming years, Boring Co will attempt to build a working Hyperloop.

From a known physics standpoint, this is the fastest possible way of getting from one city center to another for distances less than ~2000 miles. Starship is faster for longer journeys.

Most of us have always assumed The Boring Company will eventually venture into Hyperloop however, what is surprising is that Musk put such a project only a few years out. And even more, interestingly, Musk made this announcement a few days after the Boring Company raised $675 million from outside investors valuing the startup at over $5 billion.

The closeness of the two events suggests, that The Boring Company might have raised all that money in part to at least fund initial R&D efforts for the Hyperloop concept.

As of now, since Elon Musk only said the Boring Co. will try to build a working Hyperloop in a few years, it’s difficult to say how many years out we are from a working Hyperloop system. However, we will be sure to keep you posted as we get more information.

Until then, makes sure to visit our site torquenews.com/Tesla regularly for the latest updates.

So what do you think? Excited Musk has finally decided to work on the Hyperloop? Also, if Elon becomes more involved at The Boring Company what do you think that means for Tesla and SpaceX? Let me know your thoughts in the comments below.

For more information check out: Elon Musk In Talks With Twitter Board for Takeover Bid

Chad wrote on April 25, 2022 - 10:22am Permalink
When did they cancel the high speed rail from sf to la? Your guys better tell all the workers building it!
Rip wrote on April 26, 2022 - 8:20am Permalink
He probably knows he can do it faster now that he's vacating Kremlinfornia. I bet he moves Twitter out too.