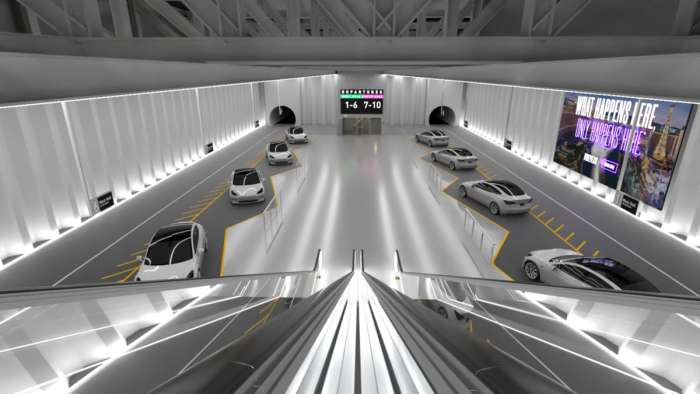 Pictures of The Boring Company tunnel at the Las Vegas Convention Center show, Elon Musk's tunneling start up is putting the final touches and is ready to commence service.
Advertisement

According to pictures posted by u/TimTri on Reddit, The Boring Company(TBC) is finishing up work on the first commercial loop system underneath the Las Vegas Convention Center (LVCC). Currently, TBC has completed almost all work for the tunnel and has proceeded to put the final touches on the passenger terminal.

As you can see from the picture above, the passenger terminal of the LVCC Loop system looks completed. The passenger waiting shades have all been topped with a solar panel, the entrance and exit to the tunnel are now painted, and the drill used to dig the tunnel now sits next to the entrance as some sort of exhibition piece.

According to Elon Musk, the LVCC loop is ready to provide service to the general public. Musk last week had said there will be a Fallout Shelter themed party for the inauguration of the project. The last hurdle on initial service now seems to be covid 19 restrictions on gatherings.

The Boring Company, born out of a tweet as Elon Musk was stuck and frustrated in LA traffic, now after so much work, seems to be ready to show off the first proof of concept commercial site.

TBC, unlike originally thought rather than using custom vehicles that could transport 12 passengers at a time will be using Tesla Model S,3, X, Y vehicles. The Tesla EVs will be able to autonomously drive as much as 155 miles an hour in the tunnel. However, Elon Musk has said Tesla will be producing high-density vehicles if needed.

For the past couple of weeks, Tesla vehicles have been spotted doing autonomous test runs in the TBC tunnels. The vehicles autonomously drive up to the station and after a short pause (presumably practicing loading and unloading passengers) proceed to drive around the station and enter the tunnel.

After the inauguration, the LVCC loop will be able to transport as many as 1200 passengers per hour. This should be a much-needed transportation service for the participants of the Consumer Electronics Show (CES) who gather at the LVCC every march.

The Boring Company plans to significantly reduce the cost of tunneling by implementing a number of breakthroughs to achieve that. The first one is the speed of the actual tunneling process which the company plans to make it an order of magnitude quicker than the fastest tunneling machines. The second is the use of autonomous vehicles to increase the speed with which passengers will be driven.

So what do you think? Are you excited for The Boring Company’s first commercial tunnel? Are you planning to try out the service when it launches? Let me know your thoughts down in the comment below.

For more information check out: Tesla Releases Refreshed Model S and X With Lots of Replacements Also, see Tesla To Get EU Subsidy For Berlin Battery Plant, But It Might Not Matter.