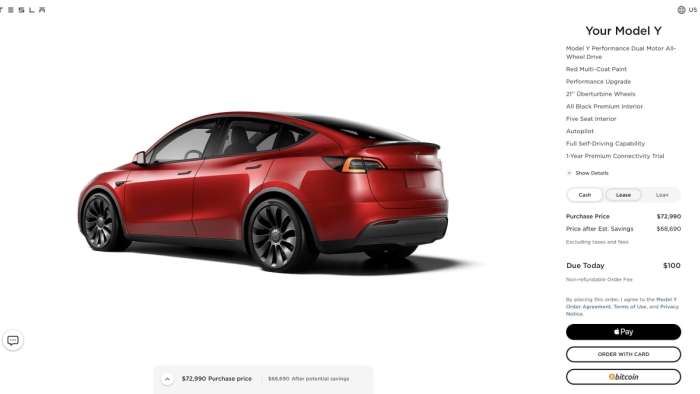 Tesla has enabled customers to buy Tesla vehicles in bitcoin. Here is the entire process with some fascinating restrictions.
Advertisement

In an SEC filing last month, Tesla announced the company has bought 1.5 billion dollars worth of bitcoin. At the time the company also said it will start accepting the cryptocurrency for customers who chose to pay in bitcoin rather than fiat currency (such as US dollar, Euro, or any other currency issued by a government).

As to when Tesla will allow customers to pay for products and services using bitcoin the company said “we expect to begin accepting bitcoin as a form of payment for our products in the near future, subject to applicable laws and initially on a limited basis, which we may or may not liquidate upon receipt.”

And now the time has finally come. In an update to the company’s online configurator, Tesla has enabled customers to use bitcoin to pay for Tesla vehicles. When customers go to place their order now in addition to the Apple Pay and Order With Card option there is now a third Bitcoin choice.

You can now buy a Tesla with Bitcoin

Once you click the bitcoin option you’re then prompted with a page with a QR code you can scan. Or Tesla gives you an option to copy and paste a bitcoin address to your wallet. Once a customer initiates the ordering process Tesla gives him/her 30 minutes to conclude the transaction.

For the transaction, Tesla determines the equivalent value in bitcoin that they charge in dollars. However, due to the volatile nature of bitcoin, those prices can wildly vary, as a result Tesla determines bitcoin to dollar exchange rate every 30 minutes. 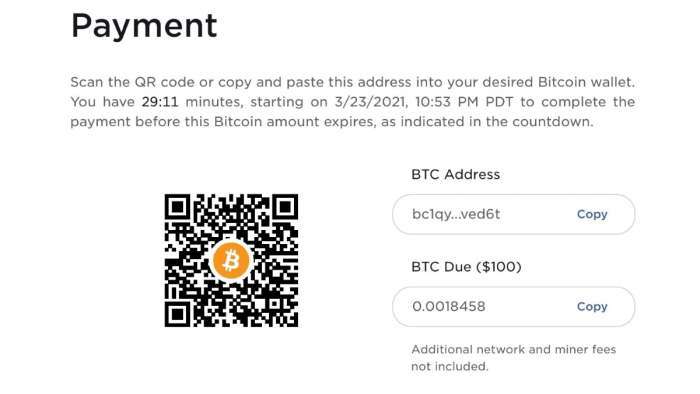 And since customers have to send the exact amount of bitcoin Tesla is due, their orders will fail if they aren’t able to finish the transaction within 30 minutes. Or in other words they have to finish their transaction before the bitcoin to dollar exchange rate Tesla uses changes.

This is truly an exciting moment for the cryptocurrency world. With Tesla allowing the purchase of vehicles in bitcoin this further validates the cryptocurrency market as more than a passing fad and catapults it to “real currency”.

So what do you think? Are you excited to buy a Tesla in bitcoin? Will any of you be trying the option? Also, given the likelihood of multiple things going wrong in the process are any of afraid to try it? Let me know your thoughts down in the comments below.