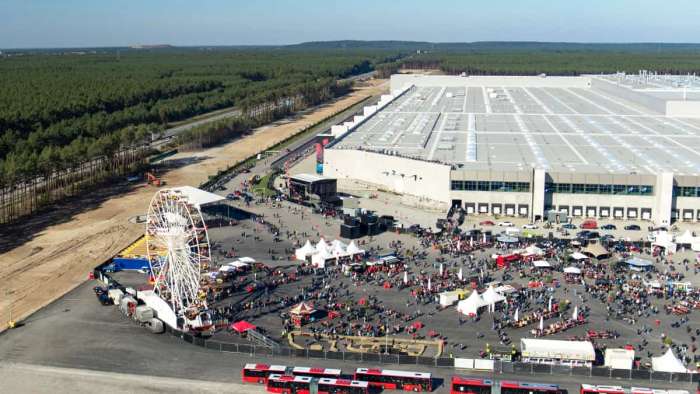 In the past few years, Tesla has been growing vehicle production at a breakneck speed. In the first 3 quarters of 2021 Tesla has delivered 627,000 vehicles and in the last 3 months of the year, Tesla is expected to produce close to 300,000 cars making the total for the year over 900,000 vehicles.

As compared to 2018 when Tesla delivered 245,000 cars, this year is expected to be well over 3X growth in just 3 years. And even more impressively, Tesla is achieving this growth in the midst of a global parts shortage that has forced legacy automakers to cut production by as much as 50%.

However, despite Tesla’s incredible success, the EV maker doesn’t seem to be slowing down. Tesla is currently building two new factories on two continents and is also looking to significantly increase production at another two operational plants.

Related news: A Model Y Leaves Giga Shanghai Every 38 Seconds - How Much Is That a Year?

However, bureaucratic red tape coupled with the global parts shortage has forced Tesla to delay Giga Berlin’s volume production. And as of now, the plant’s start date remains uncertain.

Giga Berlin is currently undergoing a tedious environmental review process and Tesla is unable to begin production until it receives the go-ahead from the Brandenburg Environmental Agency.

The Giga Berlin approval process has been marred by objections from environmental groups with dubious ties to German auto OEMs. Tesla has also been forced to redo Giga Berlin’s public hearing process due to a clerical mistake.

However, the Giga Berlin saga seems to finally be drawing to a close. According to Brandenburg Environment Ministry “as of the end of the 50th calendar week, the outstanding documents and information have been received that are a prerequisite for a decision on the Tesla application."

"As of the end of the 50th calendar week, the outstanding documents and information have been received that are a prerequisite for a decision on the Tesla application"

This means all the work, at least from Tesla’s part, is complete and now Giga Berlin’s final approval is entirely in the hands of the environmental agency.

Brandenburg’s Minister-President Dietmar Woidke is hopeful Giga Berlin’s final approval will come soon. Speaking at a recent interview Woidke said “the approval is now foreseeable, It will probably be at the beginning of the year"

'The Approval is now foreseeable, "It will probably be at the beginning of the year"

Conditions could be imposed bc the basis for early approvals includes a positive forecast for the entire project.

However, Woidke also had words of caution saying “I am optimistic but we must not stumble on the last few meters. What is important now is that we continue to do everything we can with the necessary patience to ensure that the approval procedures continue to run smoothly from a technical point of view"

It is certainly exciting to hear from Brandenburg’s highest-ranking government official that Giga Berlin production is imminent. However, considering all the roadblocks Tesla has faced during the environmental review process it’s still too early to rule out additional delays.

We will be sure to keep you posted if new issues crop up in Giga Berlin permitting process. Make sure to visit our site torquenews.com/Tesla regularly for the latest updates.

So what do you think? Hopeful Tesla can begin production at Giga Berlin in early 2022? What do you think Tesla should do if there are further delays? Let me know your thoughts down in the comments below.

For more information check out: Lucid's Stock Price Has Fallen By 30% In The Past Month, Despite The Company Taking Steps In The Right Direction Also, see Thundertruck, A Tesla Cybertruck Cool First Cousin