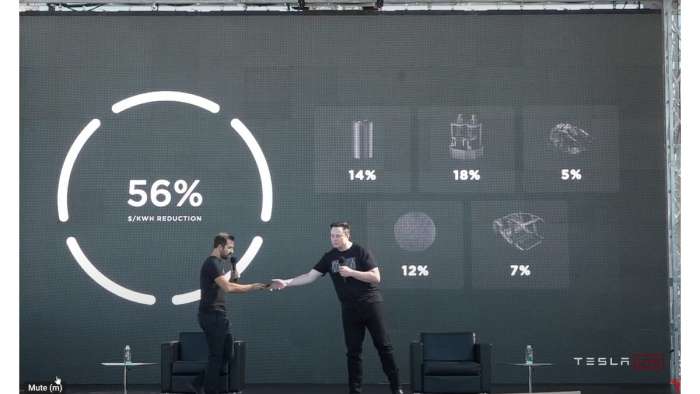 In this article, I’ll discuss the comments by auto manufacturing expert Sandy Munro and battery expert Bob Galyen made in a recent Autoline interview.
Advertisement

Sandy was very impressed with Tesla’s rate of innovation. Bob is familiar with the plans of CATL and other major battery producers and stated they are not standing still. They may be able to match or even beat Tesla in battery innovations. Both agreed Tesla Battery Day marks the end of the internal combustion engine (ICE) age. These cost declines, whether from Tesla or other battery manufacturers eliminate the last niche for ICE cars, the low purchase price.

The day after battery day, Autoline Network hosted a “Battery Day Postmortem with Sandy Munro and Bob Galyen”. Sandy Munro has been working in the Detroit auto industry since the 1980s and has founded a company to take products apart and produce cost reports. Competitors then pay for these reports because the report is less expensive and easier than doing the work yourself. Sandy Munro became somewhat disliked by the Tesla fans in February 2018 when he compared the Model 3 build quality to a “Kia from the ‘90s”. But as he drove the car and evaluated the electronics, battery, and motor, he quickly started to say positive things about the company. After the Cybertruck was announced, he praised Tesla profusely for having the courage to build a vehicle so radically different than existing trucks. He said the Cybertruck should be really cheap to build. Now he is so complementary that he goes out of his way to state that Tesla has never paid his company a dime.

I hadn’t heard of Bob Galyen before I watched the video, but that is probably because he was working hard as the CTO of Contemporary Amperex Technology Limited (CATL) a leader in battery storage. He has won a bunch of industry awards including Talent 1000 Award from China as a “National Distinguished Expert”, Automotive News “Electrifying 100”, and General Motors “Best of the Best” Award.

Comments from the video 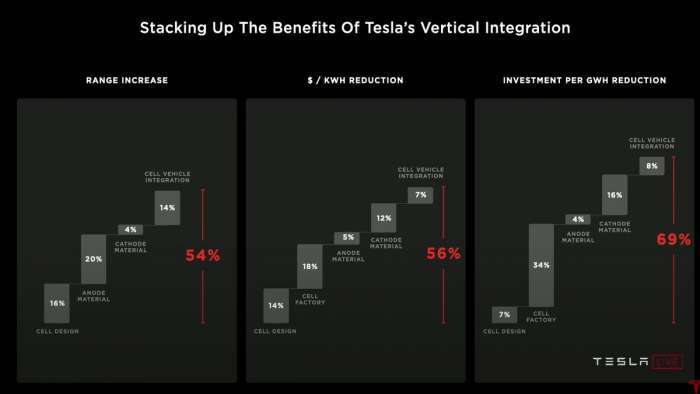 At 21:10 when they started to talk about the above slide, Sandy really lit up. Sandy said, “That slide is everything that says, if you are investing in ICE vehicles, you’re screwed”. He then went on to attribute this to vertical integration, a well-funded research and development center, and a free reign to be the best on the planet.

At 1:28:46, Bob wanted to make it clear that “Battery day announced new technologies that Tesla is working on. There is a flurry of other companies ... working on new technologies.” He went on to say many companies will compete with Tesla and they may be better than what Tesla described. Many of these companies will compete head to head with Tesla and the battery industry is not standing still; they just aren’t as open at sharing their plans with the world.

There has been a lot written about Tesla battery day. Tesla fans are over the moon about all the innovation explained. Detractors, on the other hand, were disappointed it isn’t available today and that this is only a roadmap with delays certain to occur. In this discussion, Sandy was consistently impressed with Tesla’s plans to make cheaper batteries and radically simplify the manufacturing process of building a car by casting 3 big parts instead of combining 370 smaller ones. Bob was impressed by Tesla’s presentation but made it clear that others are working on similar innovations in the battery space and there is no guarantee that Tesla’s innovations will be better than the plans of the competitors. What is different is Tesla’s strategy to be so public with their plans and patents. While other companies focus primarily on profits, Tesla focuses primarily on accelerating the world’s transition to sustainable energy, with profits as a necessary but secondary goal. It appears the future is clear. Tesla and other battery manufacturers will race over the next 10 years to increase the production of batteries at least a 100 fold from now to 2030.

Mark wrote on September 25, 2020 - 8:32pm Permalink
The advantage Musk brings to this debate is a track record. Critics may carp about the absence of actual product but I believe the many delays to Battery Day were a consequence of development issues that made Musk worry about discussing things that may not pan out. I think he is fairly confident that they are on a track to production and thus felt better about discussing product at the presentation. The one thing that interested me was Musk's speaking style and affect. I have not seen him speak before and he is sort of awkward. I cannot tell if that is part of his dorky persona or if it was a factor of discomfort in presenting things that were still in development.
Paul Fosse wrote on September 28, 2020 - 2:47pm Permalink
Yes, he has made aggressive claims before and he always delivers, maybe not on time, but eventually. Awkward is his style and that gives him credibility with geeks.
Timothy Parker wrote on September 26, 2020 - 5:39pm Permalink
If we judge Tesla by the same standards that Tesla fans judge other companies, it is clear that battery day was full of vaporware. All slides and claims and lots of arm waving and absolutely nothing to show. Given that all the noise about the million-mile battery has evaporated into a stony silence, I see no reason to get hyped about Tesla's claims until they actually deliver.
Paul Fosse wrote on September 28, 2020 - 2:50pm Permalink
If you followed the Model 3 announcement, they claimed they would produce an insanely great small luxury sport sedan and they did. A little late, but its competitors than ignored it (cough, BMW) are hurting now.
Mark wrote on September 26, 2020 - 6:10pm Permalink
I agree. Judge when delivered. My point is that unlike some (Nikola cough, cough) Musk has actually delivered on a long list of promises. That gives him a lot of credit. It is his persona that grates among the "analysts" who adore other founders. He does not fawn over them and cultivate them like others in the field do. He calls them stupid when they are stupid. I would note that there was a large chorus of "journalists" and "analysts" singing the praises of Trevor Milton when even a cursory examination of the company, Milton and his hype would reveal that they were a fraud.
Paul Fosse wrote on September 28, 2020 - 2:51pm Permalink
Both his Tesla and his SpaceX successes give Elon credibility.