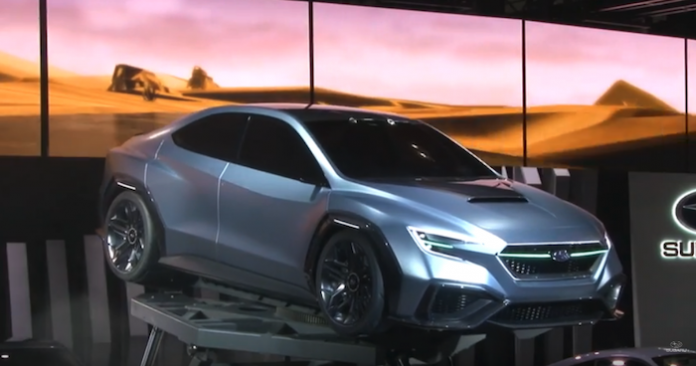 Subaru brings the rumble to the Tokyo Motor Show. Check out a preview of the next-generation WRX/STI. [Galley and Video]
Advertisement

In the Subaru VIZIV Performance Concept reveal at the Tokyo Motor Show this morning, you could hear the rumble of the high-performance boxer under the hood of the sedan. This is Subaru’s preview of the next-generation WRX and WRX STI performance sedans coming in 2019 as a 2020MY.

After the smoke cleared, Subaru Boss Yasuyuki Yoshinaga introduced a preview of the next WRX/STI, as the car was surrounded by other performance machines, the new 2018 Subaru WRX STI S208, BRZ STI, 2018 WRX STI, and Levorg STI. Subaru Corporation definitely brought the rumble to the 45th Tokyo Motor Show.

During the introduction, Yoshinaga talked about the Japanese automakers vision for the future and there’s good news for performance fans, it will include more high-performance machines by Subaru Technica International. The next-gen WRX/STI will encompass all of Subaru’s core values starting with safety.

The new-generation WRX/STI will be the safest car yet. Subaru in their press release says, “In anticipation of widespread future deployment of automated driving technologies, advanced driver assist functions combining the next-generation EyeSight system with other devices have been installed in a sedan body.”

It will get the new Subaru Touring Assist just launched in the 2018 WRX S4 in Japan. In previous versions of Subaru’s EyeSight, Lane Tracing Control only operated at speeds of 60 km/h or more, but the new Touring Assist function extends operation to any speed range. It also adds automated steering that follows the preceding vehicle in the same lane , teamed with Adaptive Cruise Control to assist drivers with automated control of acceleration, braking, and steering.

Subaru will introduce the new advanced driver-assist technologies in 2020 which corresponds with the same timeframe of the next-generation 2020 WRX/STI. The performance sedans will also come with further enhancements to EyeSight driver-assist technology, radar, and “highly accurate GPS and navigation systems” according to Subaru.

The Japanese automaker is all about safety and eliminating automobile accidents. Subaru Corporation just completed a new test facility located in Hokkaido, Japan where they will begin conducting testing of their advanced driver assist technologies.

Outside, the VIZIV Performance Concept revealed a front grill flanked by Subaru’s new design language with hawkeye headlights, muscular fenders on all four corners of the body and 20-inch wheels wrapped in 245/40 R20 high-performance rubber. The WRX/STI hood scoop conceals a turbo boxer powerplant but Subaru didn’t reveal what engine will send power to the Symmetrical all-wheel-drive system.

Look for the 2020 Subaru WRX STI to get a more powerful turbo boxer engine, (possibly a FA20 2.0-liter DIT), it will be underpinned by the more rigid Subaru Global Platform, it will come with an even lower center of gravity, and it will be lighter with the use of carbon fiber parts in the bumpers, fenders, and roof.