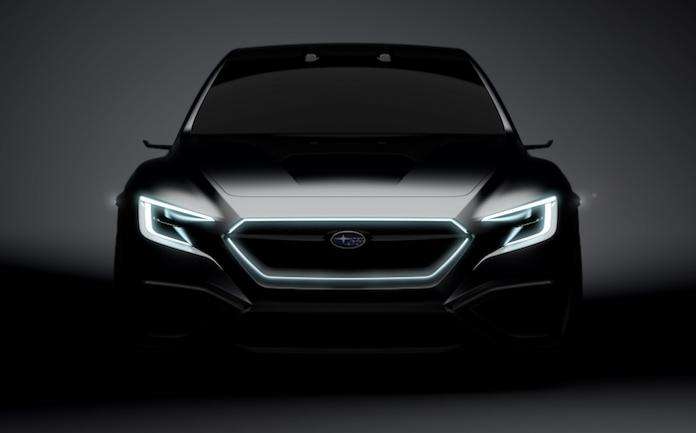 The new Subaru VIZIV Performance Concept teaser reveals what could be the next-generation WRX/STI. Be cautious if you like the design.
Advertisement

It’s coming October 25 and it will be unveiled at the Tokyo Motor Show 2017. This new Subaru VIZIV Performance Concept is likely the forerunner of the next-generation 2020 Subaru WRX and WRX STI performance sedans. The new teaser from Subaru shows the scoop on the hood of the sedan and a new design language Subaru has introduced on their next-generation models Impreza and Crosstrek.

But Subie fans should be cautious, because we all remember the WRX Concept Subaru brought to the New York International Auto Show in 2013. The production sedan didn’t look anything like the concept at the show. Susie fans were disappointed with the exterior styling of the actual production model. The same thing could happen again.

We do know the next-generation WRX/STI will get the new Subaru Global Platform (SGP) which will change the 2020 WRX/STI significantly. This new architecture will benefit performance enthusiasts. The body and chassis of the performance sedans should be 70-100 percent more rigid which will translate to improved steering response. Improvements to the suspension system will also give the performance cars a lower center of gravity which will improve overall driving performance. The new platform achieved a center of gravity 5 mm lower on Impreza and Crosstrek.

Driver engagement will get dialed up

The rally-bred sports cars have always blown the top off the fun-to-drive meter, but new enhancements will dial up driver engagement even more. Thanks to the new SGP, increased rigidity of the suspension mounting could also reduce body roll significantly. This will translate to improved performance in the corners. New suspension upgrades will reduce vibrations and produce a smoother ride quality over the current generation models.

Subaru is also upping the safety factor on the next-generation WRX, and you can also see EyeSight cameras above the windshield in the image. The next-generation WRX/STI will be the safest performance cars Subaru Corporation has ever produced. The performance models will include more high-tensile steel plates including materials formed by a hot press method, which will absorb more energy in the event of a collision. Impact energy absorption will be improved by 40 percent over present models.

What we don’t know, is what will be under the hood of the new 2020 Subaru WRX STI. Will Subaru up the horsepower in the current EJ25 2.5-liter turbo boxer, or drop in the FA20 2.0-liter DIT with additional internal upgrades and more horsepower than WRX?

JP wrote on September 28, 2017 - 1:25pm Permalink
"The new teaser from Subaru shows the scoop on the hood of the sedan and a new design language Subaru has introduced on their next-generation models Impreza and Crosstrek." Why of late are the "new design language" being introduced by other models? If anything shouldn't the WRX/STi be the models to be "introducing" new design language?? That's like the new Corvette or Camaro using "design language" already introduced by the Cruz & Malibu. Huh??
Denis Flierl wrote on September 29, 2017 - 8:41am Permalink
The next-generation WRX and WRX STI's styling could be completely different than Impreza and Crosstrek JP. The concept points to it looking more like its stablemates though. Thanks for reading!