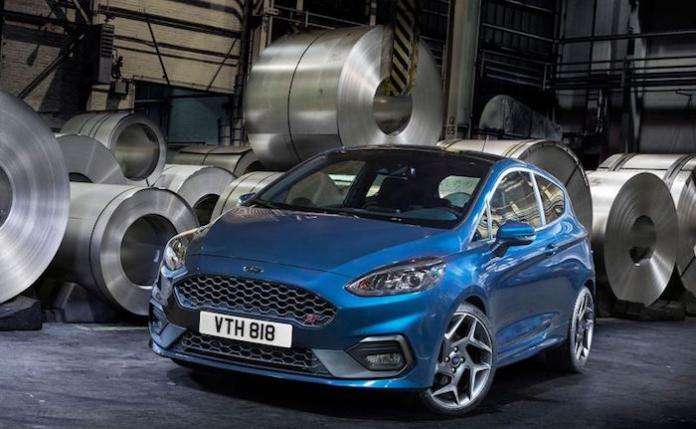 In an interview at the Frankfort Motor Show, a Ford executive says the new 2018 Ford Fiesta ST hot hatch won’t be coming to US shores.
Advertisement

Ford doesn’t think the new Ford Fiesta ST hot hatch will sell in the U.S., so it’s been axed for the North American market. The Fiesta ST was first revealed at the Geneva Motor Show in March and received positive feedback from the press and the public where it was announced. Fans in the U.S. were hoping it would come to North America, but unfortunately it’s been confirmed it’s only being built for European customers.

In an interview with Car Buzz at the Frankfort Motor Show recently, Ford Performance of Europe Director Leo Roeks, confirmed the 2018 Ford Fiesta ST will not be coming to US shores. “It’s simply a matter of a lack of interest in the B-segment in America. It doesn’t make sense, nor is it possible financially speaking, to import a single trim level, and a niche one at that,” Roeks said.

Is the Fiesta ST too small and niche for US consumers? The reason Ford is not bringing the hot hatch to the US, is because they know U.S. buyers are snatching up SUVs, crossovers, larger four-door hatch models and trucks in big numbers. This is where automakers are focusing their attention in the US. Follow the money.

It’s too bad, because the Fiesta ST could give some competition to the new niche-market Honda Type R, Volkswagen Golf GTI, Fiat 500 Abarth, or Subaru WRX. Although these cars are all compacts, a size class above the subcompact Fiesta ST, but the hot hatch makes a compelling case for itself against the bigger, more expensive competition with its turbo engine and retuned suspension.

Automakers like Nissan, Subaru, Honda, and Mazda use their niche models to draw younger customers to the brand, and then when they are ready for a larger vehicle, they trade those models in for a crossover or SUV. It’s working good even though their sporty high-performance models don’t sell in large volume numbers.

The 2018 Ford Fiesta ST is being offered in Europe with either a three- or five-door body style and is powered by a new turbocharged 1.5-liter three-cylinder engine, which replaces the turbo 1.6-liter four-cylinder. The new powerplant is more powerful and more fuel-efficient, which the Ford exec says, “This is something I’m particularly proud of.” We think there would be a fairly size-able millennial market who would snatch up the Ford Fiesta ST, but unfortunately, it’s not coming to US shores.