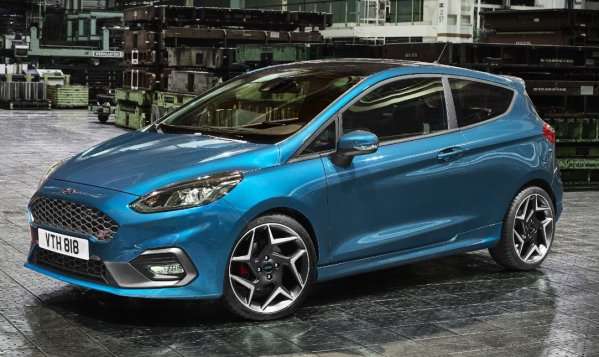 The next generation Ford Fiesta ST debuted online this morning and in addition to the restyled exterior, the newest hot hatch from the Motor Company is powered by a 3-cylinder EcoBoost engine – making this the first 3-cylinder performance car to wear the blue oval.
Advertisement

This morning, Ford Europe introduced the newest Fiesta ST and while the vehicle shown and discussed here is a European model – we can expect a very similar Fiesta ST for the American market. The biggest difference from the car shown in the image above to what we will get in the US is that this European model is a 3-door model, but Americans will likely only get the 5-door model.

Number of doors aside, the biggest news with the new Ford Fiesta ST is that the 1.6L EcoBoost 4-cylinder in the current models has been replaced by a new 1.5L 3-cylinder EcoBoost engine. Along with being Ford’s first 3-cylinder global performance engine, it will also be the first 3-cylinder car marketed as a performance vehicle in the US market.

“Our next generation Fiesta ST is true to the philosophy of delivering cutting-edge technology to enhance every facet of the responsive Ford Performance chassis and powertrain,” said Joe Bakaj, vice president, Product Development, Ford of Europe. “With selectable Drive Modes and an all-new EcoBoost engine delivering an unprecedented combination of performance and fuel efficiency, the new model will deliver the most versatile, fun, engaging and rewarding Fiesta ST driving experience yet.”

The 1st 3-Cylinder Performance Engine
The new Ford Fiesta ST is powered by a new 3-cylinder EcoBoost engine measuring 1.5 liters. In the European market, this new hot hatch will offer 200PS and 290nm of torque, which converts to 197 horsepower and 214lb-ft of torque. That is a technically an increase of 17 horsepower for the European market over the current 1.6L 4-cyliner EcoBoost, which offers only 180 horsepower. The current Fiesta ST in the US with the 1.6L mill is rated at 197 horsepower based on the overboost feature, along with 202lb-ft of torque, so when compared to the American 2017 Fiesta ST, this new compact performance car gets no extra horsepower – but it does get 12 more pounds of twist.

More importantly, this new 3-cylinder EcoBoost is quicker revving than the 1.6L engine, so it gets into the peak powerband more quickly, so while the power levels are similar between the current Fiesta ST and the new model – the 3-cylinder EcoBoost should make the new ST a bit quicker. In fact, the European market Fiesta ST with the 3-cylinder engine is promised to dash from 0-62 miles per hour in 6.7 seconds, which is how quickly the current Fiesta ST in America gets to 60mph. With that in mind, the new American Fiesta ST could be a bit quicker to 60.

Customizable Performance
There are no details on the transmission, but we can expect a manual and to improve the fun-to-drive factor, the new Fiesta ST will come with Ford’s selectable Drive Mode system. Similar to what is featured in the new Ford Mustang, the Fiesta ST will offer Normal, Sport and Track modes, with each mode adjusting the throttle response, the traction control, the stability control and the electronic power assist steering setup. There is also a new active exhaust system with multiple settings for different levels of exhaust tone volume – which is a feature that I love.

The rest of the details on the European Fiesta ST are unknown and nothing is known about the version that we will get here in the USA, but this new hot hatch sounds like it has the making of another popular performance car for the American sport compact market.

Check out the interesting debut video below, showing the new Ford Fiesta ST being gently hooned in and around Ford’s German production facility where the new hot hatch will be produced.

Parks McCants wrote on February 24, 2017 - 1:27pm Permalink
I'm astounded by the output of these new engine technologies. Thanks Patrick, as always, a good read.