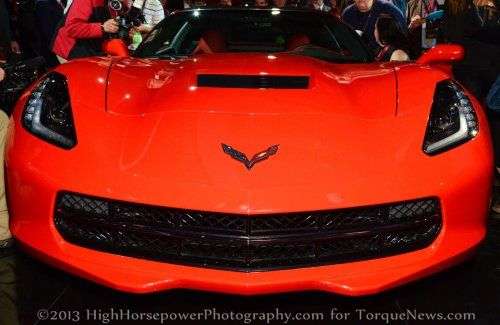 The very first production 2014 Chevrolet Corvette Stingray VIN #0001 sells for a large amount at Barrett-Jackson along with four other performance Chevys.
Advertisement

The all-new 2014 Chevrolet Corvette Stingray was one of the most highly anticipated cars to come out of GM for quite some time. It was unveiled in Detroit at the NAIAS just last week and the first production model was auctioned off at the Barrett-Jackson collector car event on Saturday. We reported here last week that the car would likely bring plenty of attention and bring a high price, and that is exactly what happened. The first 2014 Corvette, VIN #0001 sold for an incredible $1.05 million just days after the Stingray’s world debut at the North American International Auto Show.

The all-new Corvette Stingray from Chevrolet, Vehicle Identification Number ending in 0001, sold Saturday to businessman and NASCAR team owner Rick Hendrick. The first retail production model was expected to garner lots of bidding and the price was driven up quickly as the bidding got underway. Hendrick outbid everyone and walked away with the all-new Corvette with VIN #0001. The happy NASCAR team owner took delivery of the special Corvette and will likely put the car in his collection.

The proceeds will benefit the College for Creative Studies in Detroit, which is renowned for its automotive design program. Students at CCS are pursuing undergraduate degrees in 12 majors or graduate degrees in Design and Transportation design. The Chevrolet Corvette has always been sought after for its sporty design, and the all-new 2014 Chevrolet Corvette Stingray is certainly an art form with its beautifully sculpted lines.

Proceeds will cultivate the next generation of designers

“The new Stingray features a modern, dramatic design that will inspire a new generation of Corvette enthusiasts,” said Ed Welburn, GM vice president of global design. “With the proceeds of the new Stingray going to the CCS, the new Corvette will also help cultivate the next generation of designers who may work on modern, dramatic Chevrolets in the future. In fact more than 170 CCS alumni already work in the GM Design studios.”

Four other high-performance Chevrolets were also sold at the Barrett-Jackson auction and went to benefit different charities. The four cars including the 2014 Corvette, raised a combined $2.14 million at the event that concluded on Sunday. GM Chairman and CEO Dan Akerson’s 1958 Corvette sold for $270,000 with proceeds benefitting Habitat for Humanity. A 2012 COPO Camaro Convertible sold for $400,000 aiding the American Heart Association.

Restauranteur, author, television personality and game show host, Guy Fieri’s personalized 2013 Corvette 427 Convertible Collector Edition sold for $270,000 and benefits Cooking With Kids, a program by the Guy Fieri Foundation for Inspiration and Imagination. And a 2013 Chevrolet ZL1 Convertible and first Convertible off the assembly line, sold for $150,000. Proceeds from the ZL1 Convertible goes to the Achilles Freedom Team of Wounded Veterans, which helps injured veterans compete in mainstream athletics, including marathons.

Look for the all-new 2014 Chevrolet Corvette Stingray to go on sale later this year.