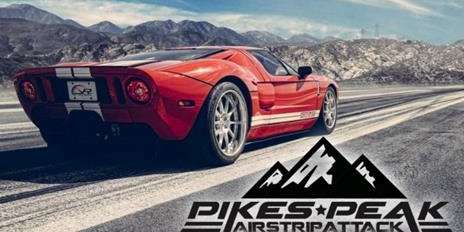 Shift-S3ctor and www.revvolution.com in conjunction with The Broadmoor Pikes Peak International Hill Climb, announced the first event of its kind, Pikes Peak Airstrip Attack. A 225 mpg Lamborghini Gallardo will be there.
Advertisement

A first-ever half-mile side-by-side roll racing event will set the stage in a big way for the 2014 Pikes Peak International Hill Climb. A 225 mpg Lamborghini Gallardo will be one of two hundred of the world’s fastest cars at this event. The Pikes Peak Airstrip Attack will be held at the Colorado Springs Airport June 27th and 28th, 2014 as part of Pikes Peak Speedweek.

This should be one exciting event for performance enthusiasts. This first-ever Airstrip Attack is a half-mile side-by-side roll race and trap speed competition featuring more than two hundred of the fastest, most powerful street cars in the nation.

Dozens of the industry's top manufacturers, personalities and performance and lifestyle organizations will be participating in the event. The highlight could be the twin-turbo Lamborghini Gallardo that has a record top speed of 224.9 mph. Will it be able to go that fast at 6,000 ft above sea level? It will sure be fun to be there and see.

On Saturday, the competition continues with more qualifying and grudge runs and leading directly into the roll race competition. In this bracketed competition, participants are matched up based on their qualifying speeds and compete head-to-head for the respective classes' title of Mile High Victor.

The Pikes Peak Airstrip Attack takes place leading up to the world's premier hill climb and the nation's second oldest motor sports event behind the famed Indy 500. The Pikes Peak International Hill Climb, features competitors racing to the summit of the 14,100-foot Colorado mountain. The event began in 1916 and celebrates its 100th anniversary in 2016.

“There's nowhere else in this country that you can secure the title of the Mile High Victor; and the ability to hold on to that record until next year's event would be a great accomplishment," said Shift-S3ctor co-founder Ryan Fisher. This first-ever Pikes Peak Airstrip Attack should be a show-stopper with the twin-turbo Lamborghini Gallardo on hand to set the bar high for the competition. If you don't have your vacation plans set yet, Colorado Springs is the place to be June 27-28.