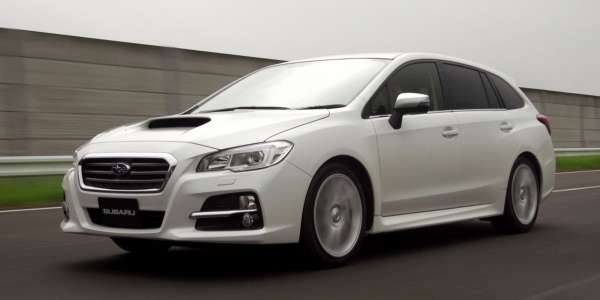 The all-new 2014 Subaru sports tourer LEVORG has received a new name called Revu-ogu. It will be available for pre-orders starting January 4.
Advertisement

Subaru has announced the official launch of their new sports tourer called the Revu-ogu. The car was unveiled at the Tokyo Motor Show 2013 as the LEVORG, and now Subaru is renaming the new sporty wagon, the Revu-ogu. The 2014 Revu-ogu will launch next year starting in May in Japan with pre-orders starting January 4, 2014.

We aren’t sure what to think of the new name “Revu-ogu.” With a name like this, it will definitely be staying in Japan and will not be seen anywhere else around the globe under that name. We’ve heard that the new 2014 Revu-ogu would also launch in Europe sometime next year. At least right now, Subaru is saying it will only be available for the Japan market.

The 2014 Subaru Revu-ogu will be the first vehicle to feature the all-new smaller 1.6-liter DIT turbocharged engine. It will also be the first Subaru vehicle to come with version 3 of the next-generation EyeSight safety system. EyeSight has received much praise from the new 2014 IIHS safety tests, and Subaru’s equipped with EyeSight are the only cars to receive a perfect score of 6.

The Revu-ogu Sport tourer will come with two engine choices. It will be powered by a new 1.6-liter direct-injection turbocharged boxer engine producing 125kW/250Nm This newly-developed engine will be a 1.6-liter Horizontally-Opposed direct injection turbocharged powerplant that was developed from the FB family of engines. The new sport wagon will be the first to get the turbocharged version of this engine that will make it to market.

It will also come with the new turbocharged 2.0-liter boxer generating 221kW/400Nm (295 hp 295 lb ft torque) that first appeared in the 2014 Forester. It will be similar to the new sport-tuned 2.0-liter boxer engine that just made its debut in the 2015 WRX at the LA Auto Show on the same day as the LEVORG premiere in Japan. The smaller displacement engine can develop more power than the outgoing 2.5-liter and sits lower in the chassis for better weight distribution.

The 2014 Revu-ogu will feature a stiffer sport-tuned suspension with electric power steering and a smaller sport D-shaped steering wheel with a thick grip. The 1.6-liter sport models will have sport 215/50R17 tires, the 2.0-liter power-performance models get performance 225/45R18 wheels and tires.

A new Revu-ogu STI could follow the launch next year as Subaru will bring not one, but five different customized LEVORG models to the Tokyo Auto Salon next month. The standard Revu-ogu sports tourer that made its global debut as LEVORG will be there along with the new performance model from STI. There will also be three of the Subaru-car-exclusive performance parts manufacturers to each present their uniquely-customized models. Subaru says each will highlight different characteristics of the new Revu-ogu.

The all-new 2014 Subaru Revu-ogu will be available for pre-orders starting January 4, 2014, with models arriving in Japan showrooms in May. Stay tuned to Torque News for the latest Subaru news.