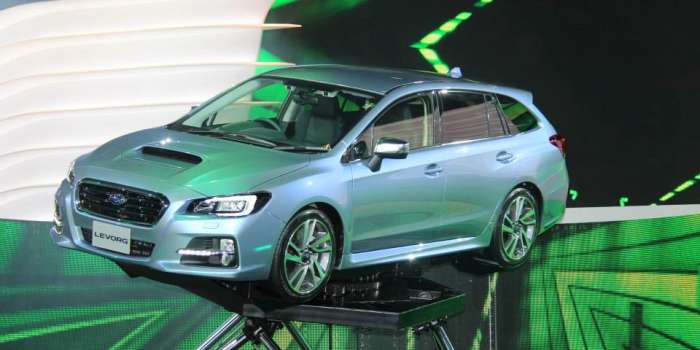 Subaru has announced they will be unveiling a new performance LEVORG STI at the Tokyo Auto Salon 2014. Will this be the 2015 WRX STI replacement for Europe?
Advertisement

Subaru and Subaru Tecnica International (STI) announced they will be unveiling a number of new performance sports tourers and one will be getting the STI treatment. We knew Subaru was going to take the new LEVORG sports tourer and make it a sporty wagon for the Japan and European markets. Now they have revealed they will be unveiling a new LEVORG STI model at the Tokyo Auto Salon 2014. The show will run from January 10-12 at the Makuhari Messe in Chiba prefecture. Will this be the 2015 WRX STI replacement for Europe?

The show in Tokyo will look like the LEVORG show because Subaru will be unveiling not one, but five different customized LEVORG models. The standard LEVORG sports tourer that made its global debut will be there along with the new performance model from STI. There will also be three of the Subaru-car-exclusive performance parts manufacturers to each present their uniquely-customized models. Subaru says each will highlight different characteristics of the LEVORG.

We don’t know if the three other concepts will make it to production, but we do know the LEVORG sports tourer will be launching next year in Japan and likely Europe. The new LEVORG STI performance model will most likely be a production model and launch shortly after. It could be the replacement for the WRX STI in Europe. The show model will come with a flexible tow bar and front spoiler to showcase the model’s performance characteristics.

The LEVORG sports tourer will launch with a new smaller 1.6-liter Horizontally-Opposed direct injection turbo "DIT" Engine. This is a new powerplant for Subaru and the boxer engine will produce 125kW/250Nm. Subaru is bringing out this new engine first in the LEVORG and possibly in other models in the future as they look to increase fuel mileage in their lineup.

The new 2014 LEVORG STI will most likely be powered by Subaru’s new 2.0-liter Boxer engine that made its debut in the 2015 WRX. The 2.0 LEVORG engine will also be a Horizontally-Opposed direct injection turbocharged "DIT" engine. Subaru announced the LEVORG 2.0-liter engine would produce 221kW (296 hp) and torque that reaches 400N (295 lb ft). The STI model could have more power as STI tunes it for more performance.

Along with the new 2014 LEVORG Sports tourer, LEVORG STI and the three customized models, Subaru will also bring the new 2014 Subaru BRZ tS production model that was launched in August. Unfortunately, the new Sports tourer and LEVORG STI won’t be making it to North America. We’ll have more information on the LEVORG STI performance model when it’s unveiled at the Tokyo Auto Salon 2014 next month.