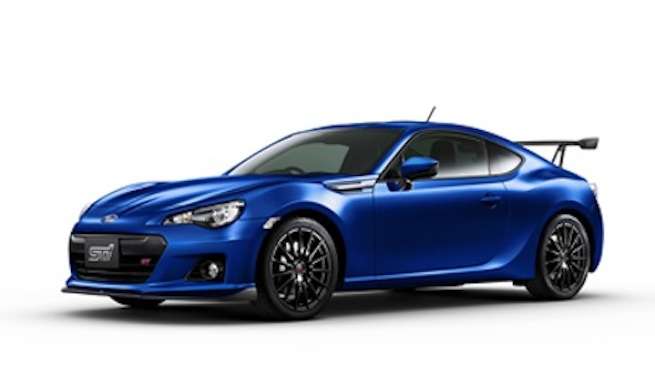 The new exclusive 2014 Subaru BRZ tS that is tuned by STI is launching in Japan today and full details have been released.
Advertisement

We knew the new BRZ tS was coming soon when STI teased an image two weeks ago. We thought it would be the full high-performance version BRZ of the two-door coupe. But details that have just been released today, reveal the 2014 BRZ performance model that is launching today in Japan will be STI’s BRZ tS. This 2014 BRZ will receive the STI performance upgrades from Subaru Tecnica International Inc. in Tokyo which is Subaru’s official performance tuner. The tS designation stands for tuned by STI. Will the new 2014 BRZ tS be the new high-performance model we expected?

Subaru has decided to wait for now on bringing out the full performance BRZ with upgrades to the engine. For now, we’ll have to settle for STI’s chassis upgrades that will come on the new BRZ tS. The handling and driving dynamics will be improved by STI who manages motorsport activities for Subaru. What they have learned through their motorsports involvement will be transferred to this new production BRZ. Subaru says the new BRX tS will offer the driver “oneness with the vehicle” and it will feature “agile handling pleasure.” Subaru released a similar BRZ S model recently in Australia.

STI will add goodies that will improve performance to the 2014 BRZ tS. It will feature exclusive tuning to the chassis like a large-diameter driveshaft and STI's suspension upgrades that will improve handling performance. The new tS should have improved handling in the corners with the addition of STI upgrades like a new STI rear suspension link with pillow ball bush, STI tuned strut and coil springs for front suspension and STI tuned damper and STI coil springs for the rear suspension.

Stopping ability will be improved with the addition of 17-inch Brembo performance ventilated disc brakes that can be seen with the STI logo. Larger 18-inch aluminum wheels wrapped in 225/40ZR18 Michelin Pilot Super Sport tires will give the new tS a more commanding appearance. tS will also feature exclusively-tuned VDC (Vehicle Dynamics Control) for extra stability.

STI exclusive treatments inside and out

Outside, the new 2014 BRZ tS will get a STI designed front under spoiler and special "STI" / "tS" ornaments. "STI" logos will appear on the front fenders and exclusively-made "STI" badges will be placed front & rear and a "tS" ornament will be features on the rear deck of the sports car. It will also come standard with an STI designed flexible tow-bar in the front.

Inside, the new sport coupe will feature special treatments like a speedometer with an STI logo inside. It will also include an "STI" logo and red stitching on the grey leather front seats, heated front seats, leather wrapped steering wheel with "STI" ornament with red stitching, and STI leather shift knob. Other interior STI treatments will include Carbon tone instrument panel, STI designed push engine switch with red "STI" logo, aluminum side sill plate with "tS" log and a red STI designed leather access key cover to round out the unique cabin treatments.

Subaru will also be launching a new "GT Package" variant which performance enthusiasts will be able to further differentiate themselves on the street and track. The GT model features a STI designed two-angle adjustable dry carbon rear spoiler, sporty black colored "BBS" designed 18-inch aluminum wheels and "Recaro" designed front bucket seat. It will also get Alcantara grey leather seats and a SRS side airbag for safety.

Subaru is launching the exclusive 2014 BRZ tS in Japan today. Only 500 total examples split evenly between the standard tS and GT variants will be built for the Japan market. While the new model won’t be offered anywhere else around the globe, we know this will be a forerunner of the full-blown performance version that will be coming. Stay tuned.