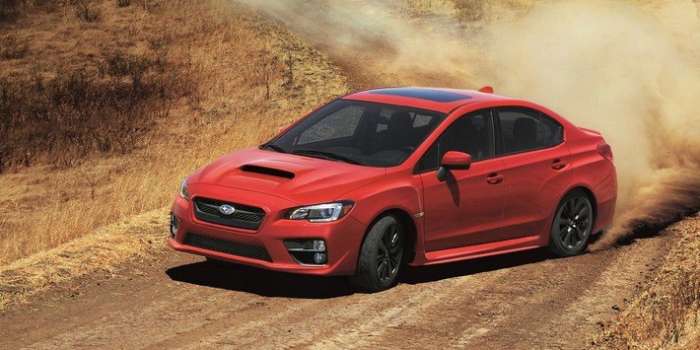 Subaru unveiled the all-new 2015 Subaru WRX at the LA Auto Show 2013 last month and now gives us a good idea of what it can do in the dirt.
Advertisement

Subaru has upgraded the all-new 2015 WRX with performance goodies that makes it better than the outgoing model. Subaru and the 2013 WRX STI rally race car has won the Rally America National Championship title three years in row. The 2015 Subaru WRX in stock form could be the the best production vehicle to take on the dirt. Subaru just released a new video below showing the new 2015 WRX getting down and dirty on a fast dirt track. What does the new WRX come with that will make it a good performer on the track?

The new 2015 Subaru WRX gets a lot of new upgrades that will make it a better performer in the dirt or on dry pavement in the corners. It starts with the architecture underneath. It gets a completely retuned high-performance suspension with 20 percent less body roll. Driving enthusiasts can take corners faster without losing grip because of its revised, high-performance suspension, a 41% stiffer unibody which translates to a 20% reduction in body roll in the curves.

It also gets a quicker 14.5:1 steering ratio. The lower ratio gives the steering a quicker response (you don't have to turn the steering wheel as much to get the wheels to turn a given distance) which is a desirable trait in sports cars. It also features upgraded front brakes with 40 percent more fade resistance than the previous generation WRX.

If you are going to play in the dirt, Subaru’s excellent Symmetrical all-wheel-drive is a must to have. Most performance automakers like AMG will be going exclusively to all-wheel-drive due to its more effective delivery of power to all four wheels. This works well on the road and track, and in wet or dry conditions. Subaru has been a leader in this area for decades and the 2015 WRX benefits from the latest all-wheel-drive technology.

If you haven’t heard of Vehicle Dynamics Control with brake vectoring you will. Electronic Torque Vectoring (ETV), is the latest technology that improves driving and traction performance. It’s a module that provides an unmatched driving experience enabling the driver to push the WRX to new limits while improving safety and stability at the same time.

An optional Sport Lineartronic automatic transmission with paddle shifters will be offered for the fist time on WRX. This new 2015 WRX CVT offers several operating modes: Intelligent, Sport and Sport Sharp, as well as step-shifting. It is supposed to emulate traditional shift points to let drivers feel the WRX's power and performance.

During more aggressive driving, the Sport Lineartronic CVT, offered in the WRX Premium model, produces stepped shifting, giving the impression of six forward gear ratios using either the ‘I’ or ‘S’ modes. When in Sport Sharp mode, the driver can use the steering wheel paddle shifters for sharper throttle response and eight-speed close-ratio stepped-shifting. While we know how the six-speed standard gearbox will perform, the jury is still out the new Sport Lineartronic CVT automatic.

If you are wondering if the all-new 2015 Subaru WRX will outperform the out-going model, the upgrades Subaru made to the new performance model will definitely make a big difference in the dirt or on wet or dry pavement.

Dmitry wrote on December 16, 2013 - 9:24am Permalink
Camera moves around much faster than the car goes. Does this mean that the car actually goes slowly?