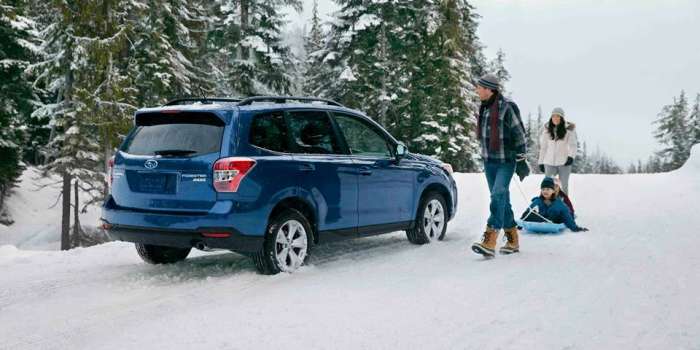 The 2014 Subaru Forester, Legacy and Outback all meet a higher standard of safety. Why do they achieve the new higher safety rating from IIHS?
Advertisement

The Subaru brand keeps getting safer with every new model year. How does the Japanese automaker keep getting the latest IIHS accolades? The 2014 Subaru Forester, Legacy and Outback received higher IIHS accolades for the 2014 model year. The 2014 Legacy, Outback and Forester with optional "EyeSight" just received the IIHS' highest standard of safety, the 2014 "TSP Plus" award and the highest possible rating of superior for front crash prevention. Every year, Subaru keeps getting the latest IIHS safety awards. How does Subaru keep doing it?

And IIHS is using new criteria this year, so it makes it harder for any auto manufacturer to receive the award. And Subaru is the only automaker to have achieved the highest possible rating of 6, with not one, but three of their vehicles. To get the Top Safety Pick, IIHS now requires good performance in the Institute's moderate overlap front, side, roof strength and head restraint tests and, for the first time, good or acceptable performance in the small overlap front test introduced in 2012.

Subaru’s EyeSight safety system made its debut in May 2008 and was the first system ever to use only stereo camera technology to detect the presence of pedestrians and cyclists on the road. Now the new system has already been upgraded and is in its new-generation. The new system includes pre-collision braking control and all-speed range adaptive cruise control tracking function. It stops the vehicle if it detects a risk of frontal collision, thereby avoiding the collision or reducing collision damage.

What this means for Subaru buyers, is they will get a higher level of safety in the EyeSight-equipped 2014 Forester, Legacy and Outback. These vehicles will not only protect their occupants in a crash, but also have the technology that can prevent or mitigate front-to-rear crashes. It’s easy for all drivers to get distracted behind the wheel, and Subaru is a leader in preventing these types of accidents.

The new-generation EyeSight features front crash prevention, which includes both warning systems and automatic braking, and is intended to help inattentive drivers avoid rear-ending a stopped or slower moving vehicle in front of them. We’ve all seen this happen and may have even experienced it ourselves. Subaru has a goal of eliminating these types of accidents altogether.