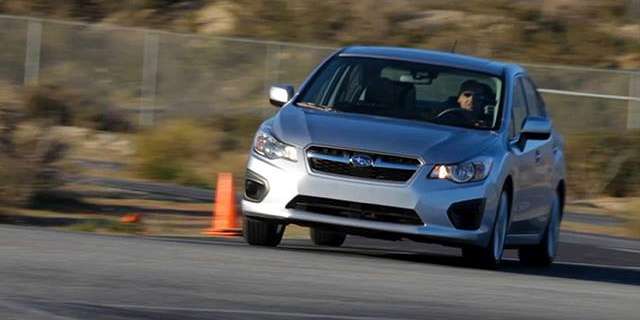 The new IIHS Top Safety Picks are out and the 2014 Subaru Legacy, Outback, Forester, Impreza and XV Crosstrek make the list. How do they keep doing it?
Advertisement

It’s no accident that Subaru keeps rolling out new cars that make the IIHS Top Safety Pick list. The 2014 Subaru Legacy, Outback, Forester, Impreza and XV Crosstrek make the new list. It is the safety standard by which automakers measure how safe their cars are, and Subaru is no stranger to the IIHS safety awards. Subaru is the only automaker in the world with the distinction of earning IIHS Top Safety Pick awards for every model it builds and has done so four consecutive years.

So why should we be surprised that Subaru has five of their 2014 models that make the list this year? The IIHS has made it more difficult to make the grade this year, and are using new criteria for automakers to get the awards for 2014. To get the Top Safety Pick, the new criteria requires good performance in the Institute's moderate overlap front, side, roof strength and head restraint tests and, for the first time, good or acceptable performance in the small overlap front test introduced in 2012.

The same level of performance in those tests, along with at least a basic rating for front crash prevention, is required to get the highest accolade, Top Safety Pick Plus. The 2014 Subaru Legacy, Outback and Forester, equipped with Subaru's EyeSight technology, have claimed the Insurance Institute for Highway Safety's (IIHS) highest standard of safety, TOP SAFETY PICK+, along with the highest possible rating of superior for front crash prevention. Additionally, the 2014 Subaru Impreza and XV Crosstrek have earned a 2014 Top Safety Pick rating.

The IIHS praised Subaru for their commitment to safety. "The Institute's awards highlight the vehicles with the best overall safety performance and Subaru is a standout," said IIHS president Adrian Lund. "The Impreza and XV Crosstrek afford buyers superior crash protection. The Legacy, Outback and Forester add the availability of state-of-the-art technology that can prevent some crashes from happening altogether."

This is not an easy task, but Subaru has been committed to safety since the 60s when they began conducting their own tests long before there was any official testing being conducted. And beginning with their 2014 models, Subaru improved occupant protection in small overlap crashes by improving all of their 2014 models structurally. For Subaru, it begins in the design phase.

Now, 2014 models have been enhanced even more to provide better protection in the structure increasing cabin rigidity and absorbing impact energy from any direction. This is the design that gives the superior protection that enables all their vehicles to keep achieving these safety awards year after year.

Subaru can be proud of this accomplishment and buyers can be confident in purchasing a new 2014 Subaru Legacy, Outback, Forester, Impreza or XV Crosstrek and know they are driving one of the safest cars on the road.