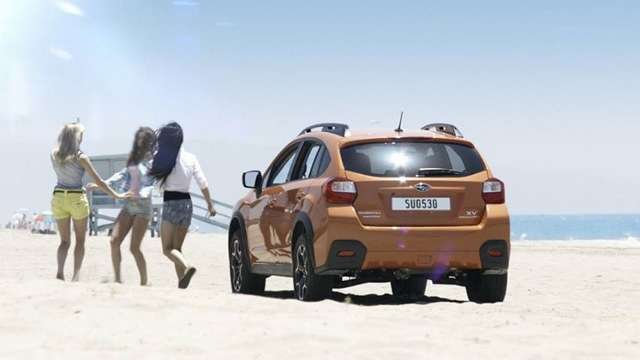 What does Subaru do when they have the best front crash avoidance system in the auto industry? They make it even better than before. Subaru isn't standing pat on their EyeSight safety system that received the highest rating possible by IIHS. It is better than any automaker’s system and it’s getting better. It will arrive on all new Subaru models starting next year like the 2015 Forester, Outback, Legacy, XV Crosstrek, Impreza and BRZ models.

Subaru has a goal to prevent traffic accidents, and they are aiming for zero accidents by automobiles in the future. It’s an ambitious goal, but if anyone can do it, Subaru can. Their parent company, Fuji Heavy Industries (FHI) is a leader in auto safety technology and is advancing forward in an impressive way. FHI has fully revamped the already successful stereo camera system from the current version of EyeSight for significantly improved recognition accuracy and added steering assist control features.

What makes this Subaru safety system the best in the world? Subaru has developed its next generation "EyeSight" advanced driving assist system to enhance safety performance and further reduce the burden on the driver. Driver distraction is the number one cause of accidents and Subaru has done something to eliminate the problem.

The next-gen EyeSight adopts the revamped stereo camera system and enhanced it with color recognition technology combined with an approximately 40% increase in viewing angle and visibility distance, expanding visible range, improving object recognition accuracy, and allowing it to recognize brake lights and red signals. This will have a major impact in reducing accidents and rear-end collisions.

Subaru says the stereo cameras have been improved to increase response to acceleration and deceleration by the vehicle ahead, as well as improved performance in terms of tracking merging vehicles ahead and corners. With color recognition for the stereo cameras, EyeSight can detect brake lights of the vehicle ahead and link it to Adaptive Cruise Control, allowing even faster deceleration when following vehicles.

A new feature called "Active Lane Keep System" has been added to the revamped EyeSight system and uses two new features. One is "Lane Keeping Assist" which recognizes the lines on both sides of the lane and has steering assist controls to keep the driver in the middle of the lane. The other is called "Lane Departure Prevention Assist" that applies force to the steering wheel to suppress the deviation if the vehicle begins to stray over the lane lines. The system determines whether the driver is operating the steering wheel or not and if not in operation, it will turn this feature off.

If the vehicle is straying from the lines when driving over approximately 65 km/h as on limited-access highways, EyeSight will display and sound the lane departure warning and apply torque to the steering wheel to correct steering back to the center of the lane and suppress lane deviation.

This pre-collision braking system has also been enhanced with the next-gen EyeSight. The relative speed at which automatic braking is possible to avoid a collision between the vehicle and an object has been increased to approximately 50 km/h. By expanding visible range, stereo cameras can detect pedestrians crossing a street and pre-collision braking is applied at an earlier stage, enhancing performance of pedestrian protection.

Subaru is leading the industry in safety technology and is advancing the development of "autonomous driving" as a safety technology to prevent traffic accidents aiming for zero accidents by automobiles. FHI is now one step closer to this goal with the new next-generation EyeSight system.

Look for the newly-developed EyeSight system to be offered on all new Subaru vehicles like the 2015 Forester, Outback, Legacy, XV Crosstrek, Impreza and BRZ models scheduled for release in Japan in 2014, and rolled out to all these models around the globe starting next year. Subaru is now building the safest cars in the world.

Martha Campbell wrote on October 30, 2013 - 8:28am Permalink
I am considering buying a new Outback, but now am thinking I should wait until next year. your thoughts?

Tesla Contemplates A New Strategy for China Retail even As Sales Boom
Jay Leno on Elon Musk & EVs: “I Think He Should Get ... Credit"
END_OF_DOCUMENT_TOKEN_TO_BE_REPLACED