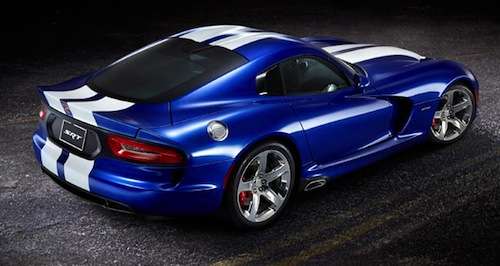 2013 SRT Viper available with more options than ever

Chrysler has announced the 2013 SRT Viper and 2013 Viper GTS will be available with more options than ever before for customization.
Advertisement

In preparation for the launch of the 2013 SRT Viper and 2013 Viper GTS, Chrysler has officially announced the full options list for the supercar. Buyers will be given more choices than ever before to customize the two available models. SRT Viper buyers will be able to build a unique car like never before as SRT is offering nearly 150,000 combinations. An extensive list of interior options, exterior colors, stripes, audio choices and wheel designs have been announced.

The 2013 SRT Viper will be offered in two models, the SRT Viper and Viper GTS. Chrysler says the extreme performance supercar is “aimed squarely at the enthusiast seeking a direct connection to his or her vehicle.” And that’s exactly what SRT is giving buyers for the 2013 models. The extensive list of features and options will give SRT Viper buyers a level of amenities never seen before.

It starts with a list of new exterior colors. Six color choices are offered for the 2013 SRT Viper: Adrenaline Red, Black Venom, Gunmetal Pearl, Shadow Blue Pearl, Bright White and Race Yellow. Three new colors to the Viper GTS lineup include Stryker Red, Tinted Pearl and GTS Blue. Two colors from earlier generation models are back Bright White and Race Yellow. Jim Parker, Head of Exterior Color and Trim Studio, Chrysler Product Design Office said, “We wanted to look forward, and we wanted to look back.” They did this by reworking the classic Viper red and also came up with a new Stryker Red dubbed ”the ultimate red.”

A wide array of wheel choices will be available for buyers, eight in all. The five-spoke Rattler and six-spoke Venom wheels are both offered in polished, hyper black and matte black finishes, the Track Package-only ultra-lightweight multi-spoke Sidewinder II comes in either hyper black or matte black.

If buyers wants to hear more than the amazing 8.4-liter V10, there are three different audio choices to choose from: a nine-speaker, twelve-speaker and eighteen-speaker Harmon Kardon premium system. Track-ready seats from Sabelt are available and come in three different material choices: premium ballistic nylon, Nappa leather with Alcantara inserts and the first application of Laguna Premium leather in an SRT.

If all that isn’t enough for 2013 SRT Viper buyers, four different optional packages are offered. A Track Package ($3,500) for speed junkies, A Grand Touring Package ($2,500 ) with technology features, a GTS Laguna Interior Package ($7,500 Viper GTS only) with premium leather, and a SRT Viper GTS Launch Edition Package for the GTS only ($15,500) that features the Blue and White paint, Laguna package, Harmon Kardon premium audio, and other special goodies.

2013 SRT Viper starting price: SRT Viper $97,395 SRT, Viper GTS $120,395. Prices do not include $1,995 destination fee, and a gas guzzler tax charge which will be finalized when final fuel economy ratings are official.

Customers can begin ordering both models of the 2013 SRT Viper in mid-November 2012 with deliveries beginning in December.