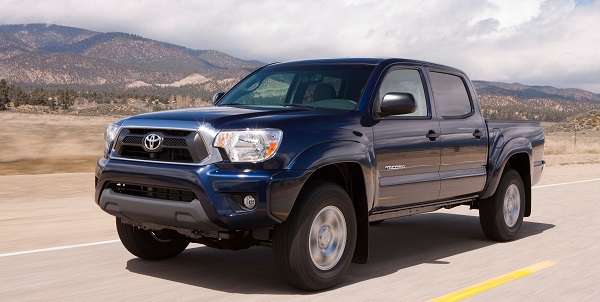 A publication we respect makes an error in judgment. Here’s why.
Advertisement

Yahoo Autos employs some of the most talented writers in on-line automotive content. The opinions they express are just as valid as any we might, but a recent story caught our attention. Called “10-Lowest Rated Cars of 2015”, the “click-through” story invites readers to explore 10 cars that Yahoo Autos and The Car Connection feel are the lowest rated in the industry right now – and to do so you have to click on about 12 separate pages. One of the cars that Yahoo and Car Connection single out is the Toyota’s mid-size pickup truck. Let’s see what Yahoo says and then compare the Tacoma’s ratings in some key categories scored by notable industry experts.

Tacoma as a 10-Lowest Rated Car
Setting aside that the Tacoma is not a car, Yahoo makes some valid points. Here’s what Yahoo says about its rating system: “A low score doesn't always mean a vehicle should be avoided at all costs. Some simply aren't up to the class standard; some are designed with good intentions but lack in execution. Often, a low score means a vehicle just doesn't meet the stringent new crash-test standards set in just the past few years.”

Yahoo says the Tacoma “Scores Low Across The Board.” Specific comments Yahoo directed at the Tacoma include “…packaged poorly…fuel economy is nothing special…on-road handling is low.” These are fair criticisms, particularly when compared to the new Chevy Colorado and GMC Canyon. The Toyota Tacoma’s 4-cylinder AWD fuel economy is lower than the 6-cylinder AWD Colorado’s, as we recently highlighted. In terms of on-road handling, we would say that is somewhat subjective given that the Tacoma comes so many ways and that fully 40% of Tacomas leave the dealership with TRD components, almost all of which are suspension and tire/wheel upgrades. So which Tacoma is poor on road by comparison to the segment is a mystery.

Experts’ Opinions On Tacoma
Now in fairness to the Tacoma, let’s look at some unbiased ratings by other organizations. Both KBB and NADA rate the Tacoma highest in resale value. That means highest period. Not just the highest rated pickup. No vehicle has a better value retention that the Tacoma.

Next we have off-road capability. The 2015 Tacoma was rated higher than the other mid-sized pickups, including Colorado and Canyon by FourWheeler Network. Petersen's 4-Wheel and Off-road network agreed, naming the Tacoma the best off-roader of any pickup truck.

When it comes to value, the expert is Vincentric. What vehicle did Vincentric choose in the mid-size pickup category as having the highest value? The 2015 Toyota Tacoma of course. Commenting on its win, Vincentric said “The Toyota Tacoma wins a Vincentric Best Value in America award for the 11th year in a row supported by the lowest total cost of ownership, lowest maintenance costs, and the highest resale value in its class.”

Tacoma Safety
Concerning Tacoma’s safety, the 2015 scored Good on all crash tests conducted by IIHS and Marginal in roof strength. In real-life use the various Tacoma models all score at or better than the average for driver death rates according to IIHS research.

Tacoma Sales
Finally, we come to what buyers think. The new Chevy Colorado and Canyon came to market early last winter (2014). Now into their 7th month of sales the Canyon and Colorado combined do not match the Tacoma in U.S. sales. Tacoma year to date is outselling the GM mid-size truck twins 55,000 to 35,000. Not bad for a truck now in its final year of its design cycle compared to a pair of completely new trucks.

We have no grudge with Yahoo or Car Connection. We just like to take opportunities to write about the Tacoma. An underdog story is always popular.