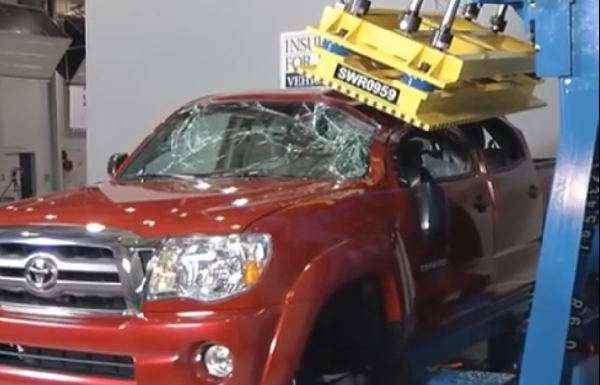 The 2015 Chevy Colorado is very likely going to be one of the safest mid-size pick-up trucks ever built. Shouldn't the next Toyota Tacoma be that good?
Advertisement

Our recent series of Tacoma stories have focused on how the next redesign will address the reality that the new Chevy Colorado looks to be an excellent mid-size pickup truck. Our opinion is that the engines in the current Tacoma line are not even close to what Chevy is about to bring. Readers of the stories on this site, and in Tacoma chat forums, surprised us by repeatedly mentioning a word that up until recently wasn’t usually part of the truck conversation. Safety.

We take the comments of our readers very seriously. We are literally trying to talk to our readers through our publication and when they reply we listen closely. The first comment about safety improvements to the new Tacoma came under our story about Tacoma’s 2-step plan to address the Colorado’s arrival on-scene. Reader DrLou said plainly “Toyota also needs to improve the Toyota's crash rating, and add rear disc brakes.” We like to stick to the Insurance Institute for Highway Safety’s (IIHS) ratings. On that scale the Tacoma did “good” in all tests except the roof crush test, on which it did “marginal.”

The toughest test in all of auto-crash testing is now the IIHS’ small frontal overlap test. This is a hard one to master because just a small amount of the front corner of the vehicle has to handle the full impact. IIHS has not yet tested mid-size pickups, but it just finished up the mid-size sport utes and the Tacoma’s sibling, the 4Runner, did not do as well as it could have. Reader Feng was all over this, saying “I think the most important thing is the Tacoma's structure, we already saw the 4Runner scored marginal in small overlap crash test, and plus Tacoma's bad roof strength, Toyota really should have done something on structures. The 2015 Colorado will definitely better in terms of safety structure.” We think he is right. Toyota in general is having a much harder time with this new test than other automakers seem to be having. The RAV4, Camry, and Corolla all missed the top score.

There was a time when car enthusiasts assumed body-on-frame vehicles (like the Tacoma and 4Runner) were somehow “tougher and safer” than unit-body vehicles (like the Highlander and Honda Ridgeline). We know that there is more to it than that because the new Highlander did better on the new small frontal overlap test than did the 4Runner. If there is one way that Toyota can improve the next Tacoma in a measurable way it would be to ace the hardest crash test of all, add Toyota’s frontal impact prevention system, and earn a Top Safety Pick+ designation. We suspect the Colorado will.

Over in the Tacomaworld.com chat room folks are also hoping to see a better rear suspension for the Tacoma. Engine, brakes, frame, suspension, roof, it sure sounds like Tacoma fans are expecting a lot from the next generation.