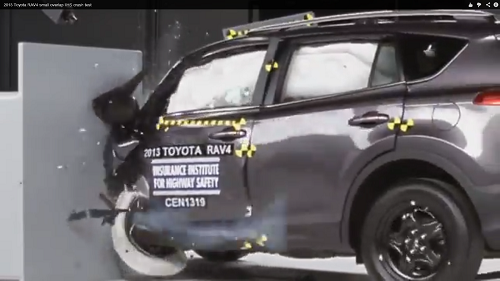 In May we warned readers that there were reasons to wait before buying the 2013 Toyota RAV4. This week the RAV4 failed the small frontal overlap crash test its direct competitors have done well on, casting doubt on its safety.
Advertisement

The 2013 Toyota RAV4 has just been tested in an important crash test and failed. The score it received, “Poor”, is one of the worst scores any Toyota has received on any type of crash test in many years. The 2013 RAV4 is a completely new design, and since Toyota was given more time than other brands to prepare for the test, there is no excuse for it having failed. Particularly since its direct competitor, the 2014 Subaru Forester, was tested and earned a score of “Good.”

In May Torque News warned our readers that there were two very good reasons to hold off buying a 2013 Toyota RAV4. One of those reasons was that Toyota had asked for more time before undergoing the very important small overlap frontal crash test. This test, conducted by the Insurance Institute for Highway Safety (IIHS), is important because up to a quarter of serious and deadly crashes are from two cars colliding head on in the way the test is configured. It is also the type of crash that frequently happens when a car strikes a tree or similar road hazard. In our story we said we were confident that Toyota would do well on the test, since Toyota was given more time to prepare. Even though Toyota made some changes, it still received the lowest score.

In its summary report of the test published on its website, IIHS made this observation about the failure of the RAV4: “The driver's space was seriously compromised by intruding structure, and the dummy's left foot was trapped by crushed and buckled sheet metal in the footwell. Injury measures on the dummy indicated a high risk of injury to the lower left leg. The dummy's head barely contacted the frontal airbag before sliding off the left side as the steering column moved more than 7 inches to the right, resulting in little airbag cushioning for the chest. Additionally, the safety belt allowed excessive forward movement of the dummy's head and torso, contributing to the head hitting the instrument panel.” The video below shows the actual test and the danger is clearly evident.

In May, 13 small SUVs were tested by the Institute. Two did well, the new 2014 Subaru Forester, and the 2013 Mitsubishi Outlander Sport. That two of 13 could ace the test shows that the test is valid, and that a properly designed vehicle can come away with a “Good” rating. Vehicles that do well on all tests including this one receive the highest possible rating of “Top Safety Pick +.” The + indicates a good rating on the small frontal overlap test. Commenting on the failure of the 11 crossovers tested that day, plus the new failure by the 2013 RAV4, Institute President Adrian Lund said "This is a challenging test. Most manufacturers are going to need to make significant changes to their vehicles in order to improve protection in these kinds of serious frontal crashes."

2013 Toyota RAV4s built after April of this year are different than those built earlier in the same model year. In order to help the vehicle do better in the test Toyota added more padding in the footwell area. Toyota also modified the steering column design. Despite these efforts, the overall structure of the small crossover was not able to handle the energy of the crash being focused on the front corner. Based on this, it is unclear to Torque News if the RAV4 will be able to be modified to meet this new testing standard.

Hat tip to TN reader and commenter BJ for notifying us of this change to the RAV4.