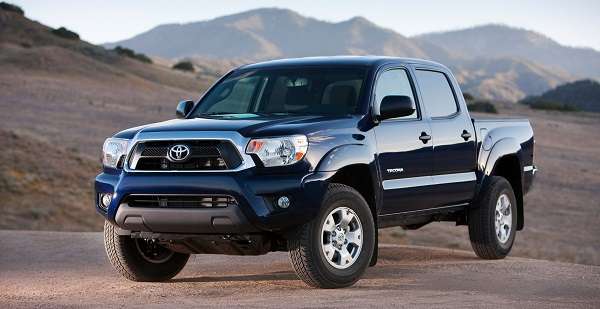 After being gifted the small pickup market by Chevy, Ford and Ram for years, the Toyota Tacoma is suddenly way behind the times. Here is Toyota's secret plan to keep it viable.
Advertisement

For a long time now Toyota has had the small truck market all to itself with its excellent Tacoma. Each year that Chevy, Ford, and Ram sat out this market, Toyota sold over a hundred thousand of the pickups. Last year it sold 160,000 Tacomas. In case you need a gauge of how many vehicles that is, it about the number of Suburbans, Corvettes, and Camaros that Chevy sold last year - if you added them all up together. Still think the Tacoma is just some sort of joke? Life was good for the Toyo Taco, but things are about to get more difficult. Chevrolet is bringing back the Colorado small pickup, and the Canyon from GMC will of course be its shadow. Time for a big-time improvement in the Tacoma if Toyota wants to keep enjoying those huge sales numbers.

We think Toyota will offer an all-new 2.0 liter turbo in the Tacoma that will make more horsepower than the top engine does now. That engine being the aging 4.0 liter V6 with 236 horsepower. The current four cylinder and six cylinder Tacoma engines both have 21 MPG highway ratings, and to put it mildly, that is going to be uncompetitive going forward in this segment. Chevy is already focusing on MPG in its marketing literature and planning a diesel, partly so that it can have a big MPG number to put at the top of adverts that shout “Best in class MPG!” As our recent article discussed, Chevy is all about stretching the truth. In this case it won’t even have to.

Although Toyota has not commented to us about this, we are pretty good at looking at the crystal ball. We nailed the Lexus RC and RC F models including the engine specs before anyone else, and have some other recent accurate predictions making us all kinds of cocky.

A new 2.0 liter turbo is for sure coming to Toyota crossovers, appearing this fall in the new Lexus NX 250T, a high power, luxury version of the Toyota RAV 4. This is not speculation, but fact from Lexus corporate communications. Toyota has also confirmed the engine will migrate through the Toyota family. Toyota will season the Taco with this spicy mill, the only question is what model year? We suspect it will be announced next year as a 2016 model and be on sale early fall of 2015. The new Colorado won’t be in full sales swing until later this year.

Frankly, this author is no fan of small turbocharged motors. However, that is the trend since it makes the most of the EPA test cycle. The Toyota 2.0 turbo will not match the power or smoothness of the Chevy 3.6 liter V6, which is just a gem of an engine, but it will allow Toyota to have an acceptable motor in the segment with decent mileage. That leads us to our next wild guess.

We also expect that Toyota will build a limited number of Tacomas with the Toyota hybrid drivetrain now found in the Avalon. It is usually designated “300h” when a Lexus motor, for example in the Lexus ES 300h. It is a four cylinder, but with its electric motor assist it generates acceptable power in big vehicles not dramatically heavier than the Tacoma. Chevy has nothing practical it could use that could match the MPG of this drivetrain. Imagine a Tacoma with 36 MPG city and 31 Highway. It would be unique. It would not sell to anyone who wants a real truck. That would not be the point. Toyota sells a LOT of hybrids to municipalities and other fleets. It could leverage this vehicle. The only challenge in this for Toyota is adopting the front wheel drive hybrid configuration to the rear-drive Tacoma platform.

The new Colorado looks great, it is going to be offered with an awesome engine, and Chevy knows a lot about trucks and how to sell them. If Toyota wants to keep the Tacoma relevant it better have some test mules running around someplace with blown four-bangers right now.

Tim wrote on March 13, 2014 - 5:42pm Permalink
I'd say your Hybrid thought is pretty unlikely considering most everyone has canceled hybrid models in pickups over the last few years (GM had a model they have since discontinued). The problem? Price/benefit with less torque and HP - those are big items for trucks. A turbocharged and/or diesel engine is more likely. Now, if they could fix the driveline vibration issue, then everyone would be happy. Toyota would also spend less time dealing with lemon law hearings.
John Goreham wrote on March 13, 2014 - 6:37pm Permalink
Good point about the hybrid. That guess is a stretch.
SJ wrote on March 13, 2014 - 5:47pm Permalink
Interesting predictions on the Tacoma
Mn wrote on March 13, 2014 - 7:25pm Permalink
First company to make mid size truck that gets 30 mpg - I'm buying it
Jason Lancaster wrote on March 14, 2014 - 10:27am Permalink
Toyota was going to drop that turbo 2.0L in the Tacoma two years ago, but decided to wait...presumably because it was more profitable to keep selling the same old 4-banger. I made the mistake of running a story about it on TacomaHQ before I had all my ducks in a row... Suffice to say, Toyota has been sitting on that engine for a while.
John Goreham wrote on March 14, 2014 - 12:39pm Permalink
Thanks Jason. You weren't wrong, just ahead of the pack :)
Matt wrote on March 18, 2014 - 8:53pm Permalink
The 2.0 turbo will likely be the base engine. Toyota will use the 2GR-FSE 3.5 V6 (same direct injected motor in the Lexus IS and GS) as the new V6 option.
Mackintire wrote on August 13, 2014 - 7:23pm Permalink
I doubt the new 3.5 V6. The highlander 4.0 doesn't even have DI yet. Add DI to the highlander version of the 4.0 and you get 290HP and a near equal measure of torque. Add a 6 speed auto and smarter ring gearing and you'll see 25MPG.
John Goreham wrote on March 19, 2014 - 9:42am Permalink
Matt, wow. Good scoop! I own that engine in my IS 350C and it is great. It seems a little expensive for a pickup with such a low sticker, but who knows? Also, I think it needs premium, which seems counter to the affordable mission of the pickup. I hope you are right. Even if it is just for bragging rights it would be a cool option. Thanks for commenting. I would never have thought of this.
hemi lol wrote on April 11, 2014 - 10:42am Permalink
I dont buy the hybrid option being a variation of the avalon. The engine layout is all wrong for a truck. IF that happens it would more likely be a unique platform they could morph into the 4 runner as well. Turbo engine i would believe possible but i think your gonna see a diesel variant. after all they already produce one for the hilux and the 4runner/prado/GX platform with the 3.0...... Correct the emissions and put a 6/8 speed behind it and tada its over 30 mpg average.......
Duncan Idaho wrote on May 18, 2014 - 11:49pm Permalink
Diesel! Diesel!! Diesel!!!
bull wrote on June 6, 2014 - 6:02pm Permalink
hahaha.... good luck, they will never let toyota bring it's diesels over here
Leo wrote on June 23, 2014 - 3:37pm Permalink
If you were to make a guess at the torque and HP numbers what do you think they might be? Also if the engine you are talking about sounds to be expensive from a corporate view, just curious why you don't think they would use the motor from the FJ? input is much appreicated.
John Goreham wrote on June 23, 2014 - 7:48pm Permalink
The new 2.0 liter turbo is ready to go in the Lexus NX 200t. We are scheduled to drive it in July (4 weeks from now). Lexus reports 235 HP, but 258 lb-ft of torque. Toyota has confirmed the engine will be made available across the brands and across the models. The move to turbos is partly cost saving, and partly because the high torque available allows the cars and trucks with these engines to do well on the EPA MPG test cycles. I'm not saying I like it, but it is the trend.
leo wrote on June 25, 2014 - 1:42pm Permalink
What about the V-6 hp and toque numbers? Do you think it will be closer to 300hp and 270 torque like the Colorado coming out this year?
John Goreham wrote on July 4, 2014 - 2:34pm Permalink
If the comment above about Toyota using the Lexus V6 is correct the engine would produce over 300 HP. So in that sense, yes, it would.
Larry Selna wrote on August 12, 2015 - 7:07pm Permalink
No Turbo and no rear disk brakes. Turns out it's an "update" with a new grill. Predict further gains for the GM twins. Hope Toyota has learned how to build a frame that doesn't turn to swiss cheese!