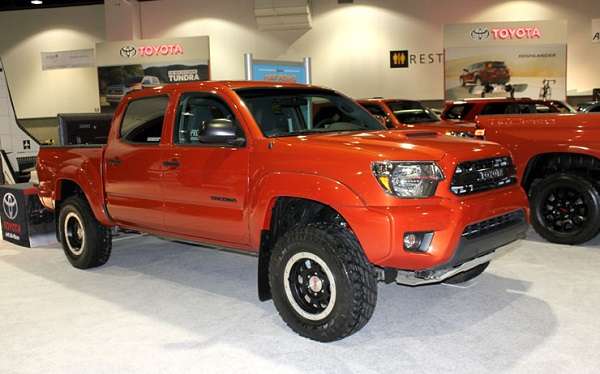 2015 Toyota Tacoma beats Colorado in Pickup of the Year voting

FourWheel Network chose the Ram as its number one, but second and third went to Toyota's 2015 Tacoma and Tundra.
Advertisement

Talk about a tough year to be a stand-out pickup truck. The F-150 is all-new, and now its skin isn’t magnetic, the GM fellas decided to re-enter the mid-size market, and Ram is simply kicking and taking. Given that, a Tacoma TRD Pro in the last year of its design cycle taking home second overall in Pickup of the Year voting is not a bad thing. FourWheeler Network chose the Ram as its number one truck, but what the magazine said about the Tacoma is what caught our attention.

Let’s face facts, GM’s new Colorado, and GMC Canyon are good trucks. Maybe great. These trucks will not only be great for GM buyers, but also for Tacoma buyers tired of lousy gas mileage. Competition breeds excellence and the 2015 Canyon/Colorado are going to as much to improve the Tacoma as any event in the Tacoma’s history.

That said, the Tacoma TRD cannot be equaled by the Canyon and Colorado yet. GM has shown a ZR2 concept that may give the Taco TRD Pro a run for its money, but by the time it arrives the Tacoma will be an all-new 2016 model.

The Z71 Colorado earned the highest score in the FourWheeler voting for its on-road ride. However, off road it was just not as good as other trucks in the competition. FourWheeler summed it up as saying “We’d love to see GM get serious with the Colorado’s Z71 package and add tougher shocks, body protection, and more aggressive tires. Maybe even a front suspension height increase.” Sounds a lot like a Tacoma TRD description doesn’t it?

Speaking about the Tacoma TRD Pro, FourWheeler Network said, “We think the Tacoma TRD Pro is the best Tacoma yet for those who want a smaller pickup with big off-road capability, and we think it’s possibly the most capable small pickup available in the U.S. today.” Read the full report here. Another nice surprise for Toyota fans is that the Tundra finished third. The Silverado and F-150 didn’t make the podium.

Mark Day wrote on March 4, 2015 - 1:14am Permalink
With the popularity of the Tacoma it's a surprise that Consumer Reports doesn't find it appealing and doesn't recommend it. But an even greater surprise is that it has one of the lower reliability ratings of Toyota vehicles - only "average".
John Goreham wrote on March 4, 2015 - 4:45pm Permalink
I hear you, but the frame rot recall thing is huge. Maybe that is what keeps it off the CR list.
Mark Day wrote on March 5, 2015 - 4:32pm Permalink
CR does have the 2016 Tacoma on its list of "10 Cars Worth Waiting For". The Tacoma's new V6 engine seems to be based on the engine in the Lexus RC 350 coupe. Lots of other positive changes coming. Since no more V6 in the RAV4, I may be looking at a 2016 TRD Tacoma.
John Goreham wrote on March 5, 2015 - 6:51pm Permalink
Yes. I have a vehicle with that Lexus engine. I'd say it is a good place to start, but hopefully it gets better mileage and has been built for torque. The truck guys need that.
Thomas wrote on March 6, 2015 - 11:43pm Permalink
John, one thing about what you said "These trucks will not only be great for GM buyers, but also for Tacoma buyers tired of lousy gas mileage. the buyers of Colorado" I was reviewing these two trucks and lots say the Colorado has a soggy gas pedal. Then I looked at 0-30mph times, 0-60 and 0-90 and finally took a look at how long it took both trucks to cross the 1/4mile. The Tacoma is faster at 2.5 seconds to 30mph and has gained a lot of ground, the Colorado just beats it by 0.4 seconds through the 1/4 mile. This must mean the Tacoma was ahead for most of the race. The mapping in the Colorado saves fuel but the Tacoma is much more responsive, easy to position in traffic and will beat a Colorado from light to light. I prefer the gas mileage of the Tacoma for what I get to what the Colorado does not get in order to save that fuel. Its a matter of preference and driveability, plus the Tacoma has a superior approach angle that gives off road and on road clearance advantages vs aerodynamics in the Colorado that hinders its ability but saves fuel. I would rather spend a little more on fuel to own a Tacoma via all the benefits that brings.
Mark Day wrote on March 7, 2015 - 4:45pm Permalink
From Thomas: "I was reviewing these two trucks and lots say the Colorado has a soggy gas pedal." There have been numerous complaints, from both consumers and reviewers, regarding the initial abrupt acceleration of the RAV4 V6 and Tundra. I own a RAV4 V6 and can verify the difficulty of achieving smooth initial acceleration. Not understanding why the manufactures can't get it right.
John Goreham wrote on March 8, 2015 - 12:11pm Permalink
The whole "Throttle tip-in" thing is a pet peeve of mine. I sometimes test a car that has a terrible throttle sensitivity and I think "Didn't they drive this thing before they signed off on it?" Most recent car with over-sensitive throttle? Subaru Impreza. Worst soggy throttle response? Anything with a DSG transmission made by VW.
Thomas wrote on March 8, 2015 - 4:57pm Permalink
The whole gas pedal tip in thing is never reviewed. Matter of preference I guess. However, only fuel mileage is ever considered as a plus when comparing two vehicles. I would think manufactures are going to make gas pedals over soggy just to save fuel so that they get better reviews and makes their vehicle look better on paper. Since gas pedal tip in is a matter of preference along with aerodynamics, how are we going to ever compare that as a positive or negative when comparing vehicles to make the ball field more fair to manufacturers who keep their vehicles responsive which will burn more fuel????.