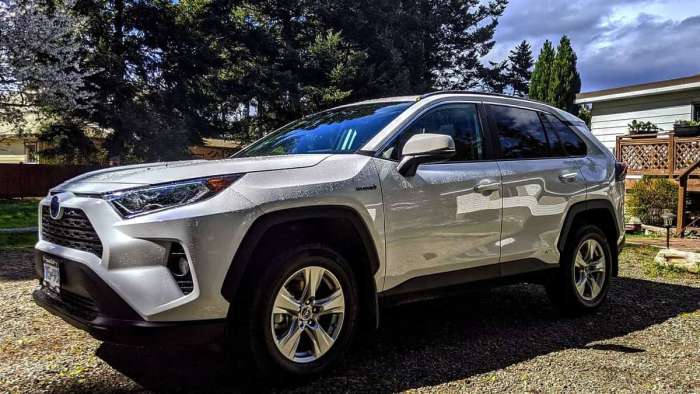 Tesla, Toyota, Hyundai, GM, Kia, Mercedes, and Dodge all have models for sale today that cost more used than new due to vehicle shortages. Here are the models that earn this dubious distinction.
Advertisement

With component shortages and the huge demand built up from the recent market disruption, many vehicle models now cost more used than they do new. iSeeCars conducted a study of a half-million recent vehicle transactions and compiled a list of the models that are selling used higher than they cost new (if they can be found new). 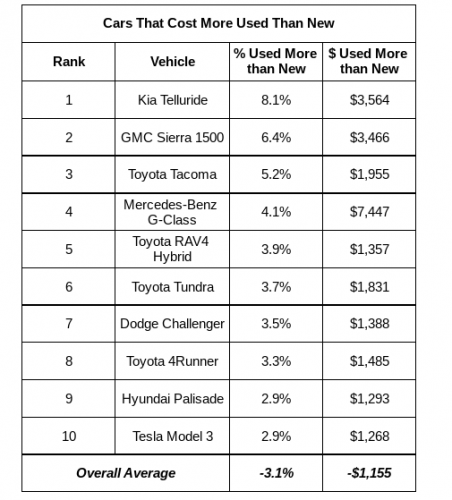 “Used car prices have risen overall, and prices have dramatically increased for certain in-demand models that may be harder to find on new car lots,” said iSeeCars Executive Analyst Karl Brauer. “Dealers may think that used car buyers are willing to pay more for the instant gratification of a lightly-used vehicle they can drive right off the lot rather than wait for a new one.”

Toyota has four of the ten models with the highest differential between the current used selling cost and the new car price. They include the RAV4 Hybrid, Tacoma, Tundra, and 4Runner. The Kia Telluride is the model with the largest gasp between the new cost and used cost at over $3k. “The Kia Telluride has been a red-hot seller since its debut in the spring of 2019, and dealers have been charging over MSRP because it’s in such high demand,” said Brauer. “The price hikes have trickled down to the used car market, where used Tellurides aren’t yet abundant and buyers may be willing to overpay for a used version that is likely the only one available.”

The Tesla Model 3 is the lone BEV on this list. The Tesla Model 3 makes the list in tenth. “The Tesla Model 3 debuted in 2018 and resale value has remained strong thanks to its impressive technology and performance as well as its relative affordability compared to Tesla’s earlier vehicles,” said Brauer. “Buyers are also likely drawn to buying a lightly used Tesla Model 3 on a lot rather than waiting weeks for the delivery of the vehicle.”

So why does Toyota have four models on this top-ten list and no other brand has more than one? “Toyota has halted incentives on its new trucks due to lowered supply, and buyers who want these highly sought-after trucks can likely only find used versions,” said Brauer. The trucks are joined by two Toyota SUVs: the fifth-ranked RAV4 Hybrid and the eighth-ranked 4Runner. “Toyota has the leanest inventory among all automakers, and demand for the popular 4Runner off-road SUV has outpaced supply on the new car lot sending prospective new car buyers to the used car lot,” said Brauer. “The RAV4 Hybrid was notoriously scarce as both a new and used car even before the microchip shortage, and used car shoppers may be willing to pay more for this vehicle as gas prices soar.”

Check out the full study at iSeeCars.com to see if your is one of the additional cars that makes this list.

Mark Wagner wrote on July 4, 2021 - 9:42am Permalink
have you heard about INFLATION????
John Goreham wrote on July 5, 2021 - 11:06am Permalink
Inflation is a big deal right now and I think it will become a bigger deal. Add some more of your thoughts on how inflation makes a used model cost more than new. Tell us how you think it comes into play. Why would a person buy a used Tacoma for a higher price than they could pay for a new Tacoma without the miles and reduction in warranty period.