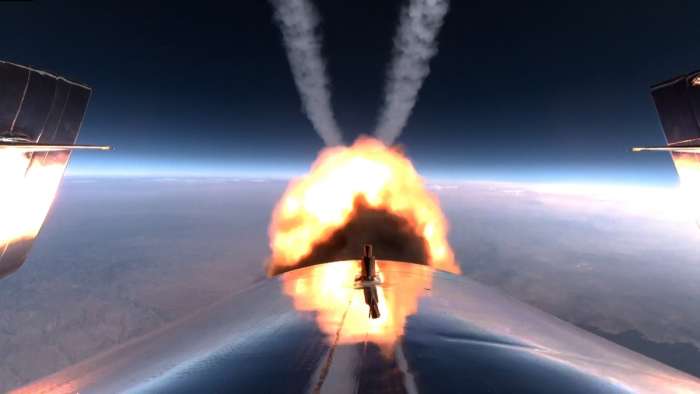 Virgin Galactic’s Tourism Space Plane burns hydrocarbons for fun. Aren’t we in the process of making that illegal in the United States?
Advertisement

The United States is quickly moving toward mandating that pleasure vehicles in the United States emit zero tailpipe emissions. Whether you agree with this as a wise policy or not, it is the goal of our present administration, and of many automakers. Some automakers are already there. Others have popular zero-local-emissions vehicles on sale today and they can’t keep up with demand. So why are we collectively applauding a passenger vehicle that burns chemical propellants so the wealthiest among us can look out the window and enjoy the view?

If only one American or a handful were planning to spew pollution out the back end of a rocket (oh, and the spaceplane is lifted to a starting altitude by another plane burning hydrocarbons) it wouldn’t really matter much. However, Richard Branson says that the goal of his company is to take everyone to space. Here is the company’s official statement: “We are at the vanguard of a new industry determined to pioneer twenty-first-century spacecraft, which will open space to everybody — and change the world for good.” Are more emissions in our atmosphere good? Don’t tell my 10-year old who practically has a seizure if we put the trash in the wrong recycling bin.

The BBC reports that the Virgin Galactic spaceplane burns hydroxyl-terminated polybutadiene aka HTPB. This solid rocket fuel has been in use for a half-century. What are the atomic constituents of HTPB? Carbon and hydrogen. It’s a hydrocarbon. The consistency is often described as rubbery or plasticky. Who remembers when plastic was also something we wanted to use less of?

Here’s a quick primer on HTPB courtesy of Wikipedia. Use Google to check out its chemical makeup if you wish.

Were we sending spaceplanes to near the edge of space for science, or to study, let’s say climate change, the expenditure of hydrocarbons could be justified by the gains. Sending bajillinaries to the edge of space using chemical propellants so they can look out the window and check off a box on their bucket lists seems no more sensible than 797 horsepower passenger cars burning gasoline buy the bucketfull.

If you oppose using chemical propellants to launch one-percenters up for a peek at the horizon sign this petition by posting a comment below.

Katey Coffin wrote on July 13, 2021 - 12:25pm Permalink
Virgin Galactic has it's priorities all wrong. Burning hydrocarbon fuel to go to the edge of space is toxic to humanity. Shame on you for your greed, short sightedness, and disregard for Earth's health. I cannot support any non-zero emission method.
jg wrote on July 14, 2021 - 10:45am Permalink
I’ve been waiting for someone to do an analysis of the different “billionaire rockets” and how much they are polluting the environment. It always impressed me how “clean burning” the space shuttle main engines looked, and the Blue Origin rockets seem to have a similar look. Ever since first seeing the Virgin Galactic vehicles spewing that black exhaust, I’ve been ranting about it to anyone that would listen. To see some actual information about the toxic nature of the fuel they use is somewhat satisfying, but without some kind of environmental laws to “limit toxicity” our cities are all going to be in bubbles so we have somewhat clean air to breathe. Good thing we’re working on surviving on other planets because we’re going to need the same technology on Earth before too long.
Calvin wrote on August 2, 2021 - 8:48am Permalink
Pls at least impose a super high carbon tax on space tourism before it becomes popular and kill mother earth. It is most silly to allow this to take off for leisure
Gloria Garfunkel wrote on October 4, 2021 - 7:58pm Permalink
Allowing billionaires to promote climate change with rocket fuel just for fun should be banned, illegal, and fined for the damage already done to the environment.