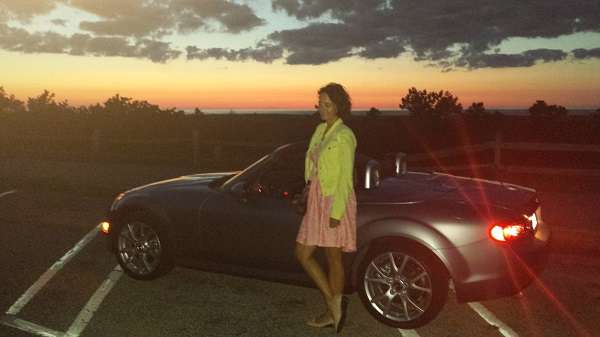 If you want to understand the Miata, you need to set aside the analytical and focus on the emotional.
Advertisement

The Miata is about to switch model years to the 2015, the last of its generation. More importantly, the bigger news is that a completely new 2016 Miata is about to be revealed in just a few weeks on September 3rd. However, I had a chance to test this Miata this week, and if this review can help just one man or woman to buy a Miata, I felt it was more than worthwhile. You see, in my opinion this car is the best roadster available at any price. We are not going to delve into the numbers here, but rather focus on what it feels like to drive a Miata.

A little background is in order. I owned a 2007 MX-5 Miata Grand Touring, which was almost identical to the car I review here. I had it four years and later traded “up” to a Lexus Convertible. I have missed that Miata every single day since and I wish I had kept it. So, yes, I am biased. Try to find a reviewer who has any experience with this car that isn’t.

So much has been written about the Miata since this generation debuted as a 2006 and a half model year that I am going to assume you know it is a rear-drive, 2600 pound, 167 horsepower convertible. The 6-speed manual is one of the best ever made, by any car company. These numbers and facts don’t really explain the essence of the Miata though. For that, we need to discuss feelings and emotions. So that is what I will mainly try to do in this review.

The Feel of a Miata When One Accelerates
Starting from a stop in a 2014 Miata Grand Touring and really putting the boot to this car is the first sign it is something special. Despite its limited slip differential, the car can easily chirp the tires, and the wonderful stability and traction control lets it. As you move up the rev band, the car starts to growl and then roars. The engine seems to want this. Unlike almost all four-cylinder cars, the power is plentiful, and the feeling of speed is intense. Redline first and shift as quickly as you can to second. The car loves this. It will chirp the tires again, and the revs will build smoothly. There is no step in the powerband as the variable valve timing comes in to add power. The car does not lose its thrust until redline. Now up and to left is third. You make the little “H” movement, and you feel like a hero. The car continues to surge forward. You will be smiling with your mouth, eyes, and soul at this point. Oh, oh, look out! A policeman is pointing his radar gun directly at you! Look down. You are not breaking the speed limit. However, you feel like you are exceeding the speed limit by about double. This, my friends, is what makes the Miata a better roadster than the Viper, the Corvette, and any other car on earth. You can use it to its fullest on public roads.

Driving a Miata is Like Robbing a Bank
One way to describe the feeling you can get from a Miata is this little scenario. Image you are the only customer in a bank. Suddenly, all the tellers leave their posts and go in the back room. You cannot help yourself, and you reach over and grab a stack of $100s from the drawer. You turn and standing there is a policeman. He steps back; pushes open the door and holds it for you and says “Have a great day!” The Miata feels fast on public roads. You can flog it, toss it around, redline the tach, speed-shift it, brake harder than you ever would in anything else and you will not be committing a crime.

Cruising In a Miata
If that were the only way to enjoy a Miata, it would not be the best roadster on Earth. Speeding around in the Miata is just one of many ways to enjoy it. If you live where there are some nice back-country roads with hills, turns, and scenery, the Miata is your new best friend forever. First, put the top and glass down. Next, left arm bent and rested on the door-frame. The position is perfect. Steer with your right hand. You can cruise in third or fourth from about 25 MPH to about 50 MPH this way and never need to shift. Or, you can use 2nd, 3rd, 4rth, and 5fth just because it is fun to row up and down the gears.
If you are rowing the gears, use your left hand to steer. Hold the wheel at the ten o’clock position. The steering is so direct, and so perfect, you won’t need to move your hand on the wheel. Just turn it about 30 degrees left and right all afternoon as you cruise.

The Miata is known for its exuberant handling and its zoom-zoom, but the untold fact is that this car is also a fantastically comfortable cruiser for a Sunday drive of up to about two hours in duration. The only part of you that will hurt is your face. Perma-grin does cramp the face muscles.

Spirited Driving In the Miata
Toss a 2014 Mazda Miata into a corner, and you will be rewarded. The car can take it. Push it a bit more, the car tucks in and you now feel like a pro driver. Push it just a teensy bit more than you know you should. The stability control will correct your line, beep, and give you a little icon to remind you that you are not on a racetrack.

The car turns with such directness many people call it go-cart-like. I can’t improve upon that simile. The car also brakes very differently than other cars. The front end barely moves as you stand on the middle pedal. The car seems to stop not like a car, but like some type of cartoon animal that just goes from full speed to zero with no fuss.

One of my favorite things the Miata can do I have never felt in any other car is use its rear springs. Imagine going over a rise and the road drops abruptly after you do. The Miata goes over and then comes down, and it does this cool little bounce where you feel the shocks compress behind you. Then the car pushes itself back up, but not past level, just back to perfect. I have never felt that in any car. Priceless.

Good Vibrations
The last thing the Miata has that few others do is good vibrations. The car is not smooth. That is a huge compliment. It vibrates. The feelings are entirely wonderful. They used to put my younger son to sleep after a 5 minute drive. However, for the driver, who controls the amplitude and duration of the vibrations with the throttle and stick shift, the vibes are all good. Try it, and you will understand.

Sweet Sounds of the Miata
The one gripe I had about my 2007 Miata was the engine sound. It was a little bit buzzy. About 2009 Mazda fixed that and the engine now sounds amazing. It is a much more masculine sound, and I have created a video taken at night that captures it perfectly. I posted it up on Facebook and asked people to identify which performance car it was. Only a person currently driving a Miata (Aaron Turpen) could identify it. Everyone else guessed it was something much more expensive and much more powerful.

The Miata currently in production is a 2014. It will switch to the final production year of this generation in the next month or so, but the car will be unchanged. About 18 months from now the all-new generation of the 2016 Mazda Miata will come to market. Don’t wait. Buy one now. None of us ever knows how long we have. You can always trade up later. Although having done that, I can tell you from experience, you will regret parting with this car for years. It’s been three years for me, and I still miss it terribly.

Related Stories:
Mazda Miata PRHT's top is the best convertible roof on any roadster
Buy a 2014 Mazda MX-5 Miata or wait for the all-new 2016?
2016 Mazda MX-5 Miata vs. Dodge Hellcat Challenger - which excites you more?
Can the Tesla Model S beat the Mazda Miata's time around a racetrack?

Doug wrote on August 19, 2014 - 11:29am Permalink
The author perfectly describes the feeling that only a Miata can give. I have been teased by male friends of mine about driving a "chicks car" and my reply to them is that only guys that have never driven a Miata would call it a "chicks car". I have told my kids that one of them will inherit a Miata from me because I plan to have one until the day I die. Let's just hope it won't be until I'm at least 100 and still able to drive it.
Soakee wrote on August 19, 2014 - 1:52pm Permalink
Agreed - I've never understood why it's considered a "chick's car" (or as the Brits refer to it: "hairdresser's car"). Ask anyone why they call it a "chick's car" and they can't answer. But tell them that their pickup truck (in which they never haul anything) is compensating for something, and they get angry.