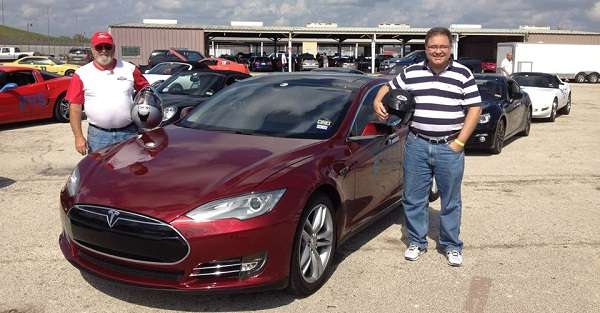 Can the Tesla Model S beat the Mazda Miata's time around a racetrack?

Teslas beat Corvettes and other near-super cars on the drag strip, but can the Model S driven by a pro beat a Mazda Miata on a road course? You may be surprised by the test results.
Advertisement

In case you don’t participate in modern on-line living, we should tell you that there is a pretty large amount of video you can watch showing the $100,000 Tesla Model S drag-racing against cars in its price range and doing very well. Tesla fans first went cuckoo over the drag race video showing the Model S holding its own and winning one out of 2 drag races against the 2014 Corvette Stingray (story and video link below). Since then, there have been many more videos and similar stories. However, Motor Trend in this month’s June 2014 issue reveals an interesting test it did with a 2013 Tesla Model S that resulted in the magazine comparing its professional driver’s on-track lap times in the fastest Model S to a Mazda Miata.

Kim Reynolds at Motor Trend is a respected auto industry writer. He is presently doing a long-term test of a Tesla Model S P85+. Every Tesla fan worth his weight in lithium knows this is the bad-boy Tesla. This is the big bucks, big battery version of Tesla’s only production car that the elite motor press always seems to get as a tester from Tesla. How come Tesla never sends over the dramatically slower 60 kWh version? Long-term tests of Teslas are few and far between so we have been watching the progress of this car and this test. The most notable thing so far in our opinion is that the entire drivetrain of the test car was replaced by Tesla at about 10,000 miles (under warranty due to a “transmission” concern according to Tesla). Read the report yourself, and draw your own conclusions about an electric car needing a new drivetrain before a BMW would have had its first (free) oil change.

Kim is probably an excellent driver. However, the automotive press has recently taken to hiring pro drivers with a pedigree to test their cars on track. I was once working as a volunteer pit-in marshal at a track and witnessed an “under-skilled” automotive press member put a brand new Lexus IS-F into the barrier at first turn at Lime Rock, so maybe they are on to something. Motor Trend uses Randy Pobst as their on-track driver, and he put the Model S P 85+ to the test at Laguna Seca*.

The Model S did well on the track, putting in a time of 1:52:16. In its print edition Motor Trend called that a “Good, but not great, Miata-matching” time around the track. Now, before the letters start, go to Youtube and type into the search box the words “Miata passes.” You should get a list of results starting with “Miata passes Ferrari while racing.” The list is long and distinguished, as they say, regarding cars that Miatas can pass on a racetrack. That is why they are so popular. I’ve driven a race-prepped Mazda Miata on a racetrack and I couldn’t pass gas in the thing, but that is due to my lack of experience. A skilled driver can make that car a track terror and embarrass cars costing 4 times as much – and they often do just that.

Reynolds was horrified that the Tesla couldn’t do better than a Miata. Based on the very specific messages the car was giving him, he understood that the car was limiting the power to the ground due to its battery temperature. So he bought 15 bags of ice, cooled the car’s drivetrain and then they re-did the test. And it was slower.

Stephen Pace is a Tesla fan, Torque News reader, and Model S owner who does take his Model S to the track as we reported in a prior story. Mr. Pace knew exactly what the issue with the Tesla was, and he has an idea about how to make the Model S a better high–speed road car.

Mr. Pace told us that “When I've put my Model S on the track there is a yellow line that appears that shows you exactly how the car is being limited. The Model S is fun on the track, but it really isn't a track car. The first lap is going to be great, but every lap after that is likely to be slower as the battery works to protect itself.”

Although it is true that the Tesla Model S is not really a track car, it is so darn close it is a shame there is not a “track-pack” option. Mr. Pace has seen the future of the Model S and he told us his vision, saying “What would be super cool is if Saleen's Tesla setup would introduce some additional battery cooling, perhaps rigged up to the frunk area. They would likely need Tesla's help in this endeavor, and I'm not sure it is a priority for Tesla at the moment, but it is a solvable problem. No doubt Tesla will eventually address this with some type of 'racing' option for a price. Meanwhile, maybe the mods for the German autobahn will include something in this area? Running 130 MPH for an extended period would likely result in the same issues, so a true autobahn version seems like it would need SOME type of additional battery cooling.”

Our opinion is that the 4600 pound Model S sedan should be proud to be able to run a twisty race course with frequent elevation changes as quickly as the 2480 pound Miata sports car. We feel the title of this story is a compliment. Please let us know what you think of this, but please also buy the magazine and read the issue for yourself. Help feed a writer’s family. The Motor Trend story starts on page 120 of the June issue. Ultimately, Reynolds found a shorter, flatter track that suited the Tesla better and put in a time matching that of the Jaguar XFR-S. What a relief!

Related Story:
Tesla Model S vs. Corvette - Why we love this matchup

Note: If you look at the on-line version of Kim Reynolds’ story we refer to you will not see the “Miata-matching” comment. You have to buy the magazine. We have reached out to Mr. Reynolds asking why and will add his comments if he replies.

Note: Story image is not of the Motor Trend car tested. Rather, it is Stephen Pace and his car at the track on another occasion. Photo courtesy of Mr. Pace.

Patrick Rall wrote on May 19, 2014 - 12:16pm Permalink
Ooohhh...a $100K+ car is as fast as a $25k car, Impressive. Notice, great performance vehicles dont spend their days trying to prove to people that they are great performance vehicles. Marketing performance at its finest. Zzzzzzzzzzzzzzzzzzzzzzzzzzzzz...
Parks McCants wrote on May 20, 2014 - 5:38pm Permalink
Tough crowd Patrick. I agree. I've interviewed a handful of Tesla owners.I don't believe they purchase the car for its race performance. Frankly, I grow tired of the hoopala surounding this battery powered richman's toy.
Ted Schmitt wrote on May 19, 2014 - 2:32pm Permalink
Hello...A better comparison would be the Tesla ROADSTER vs. the Miata around a track.
John Goreham wrote on May 19, 2014 - 2:45pm Permalink
Absolutely! 'Cept the Tesla Roadsters are no longer in production :(. Even better would be a Tesla Roadster vs a Lotus Exige S.
Alan Dean Foster wrote on May 19, 2014 - 3:08pm Permalink
Hmmm...huge five-seater family sedan with storage space of a small SUV matches performance of two-seat sports car. I'd call that close to ground-breaking.
John Goreham wrote on May 19, 2014 - 3:16pm Permalink
That was the comment I was hoping to see. Someone sees it my way. Thank you
Aaron Turpen wrote on May 20, 2014 - 12:43am Permalink
Uhh... no it's not. Nearly every two-seater with an engine larger than a Sears Lawnmower can beat a Miata. They aren't exactly race cars. In fact, I've personally watched Subuaru BRZ and Scion FR-S 2+2s smoke the Miata on the track.
Colin Barton wrote on May 5, 2015 - 4:18pm Permalink
ok, let's get real. how about p85d vs mercedes s classvs bmw 7 series vs audi a8 vs lexus ls on a track. now that's comparing apples with apples, full size luxury sedans
John Goreham wrote on May 5, 2015 - 4:34pm Permalink
In the past, the problem was that the Tesla could only do one lap. Maybe two if the track was short. Then its internal temperature control devices would step in and disable the power to limp-home mode. So mixing it up on racetracks vs. cars that can do multiple laps has not been the Tesla's game in the past. Maybe things have changed. I'm not trying to dis the Model S, it is amazing. Here is an example story explaining what I mean from Motor Trend one year ago: http://www.motortrend.com/roadtests/oneyear/alternative/1404_2013_tesla_model_s_p85_update_4/