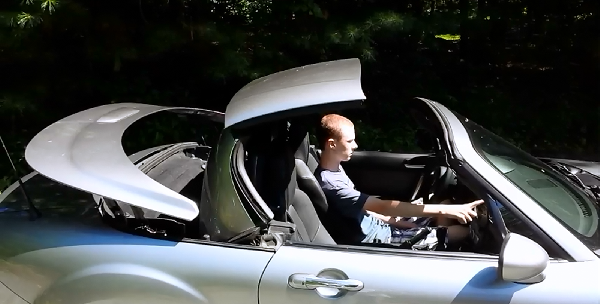 The Mazda MX-5's hard top is a marvel of simplicity and works better than any convertible top we have ever tested.
Advertisement

Mazda’s MX-5 Miata gets the attention that it deserves. In our recent emotional review, we argue that it is the single best roadster for use on public roads at any price. However, the Power Retractable Hard Top (PRHT) does not get the credit it deserves. This top has many practical and unique features we loved in our recent testing.

I have owned a current generation Miata (2007 Grand Touring) soft-top and I currently have a Lexus IS 350 C hard-top convertible. My experience with both leads me to believe that the Miata PRHT combines the best of both options.

PRHT Simplicity
The best thing about Mazda’s MX-5 Miata PRHT is that it is very simple. The roof itself is just two pieces, and there is an additional hard cover that closes over it (a tonneau cover is what I’d call it if it were soft). Many hard-top convertibles have a lot more going on. That means more mechanisms, and more areas to join and seal, which means more opportunities for creaks and rattles.

The PRHT does not intrude on the MX-5 Miata’s trunk at all either. This is a big deal. In my Lexus, the hard-top takes up fully 2/3s of the trunk, and I have to move a cargo shield back and forth. The Miata’s small, simple roof segments fold up into the same space that the Miata’s soft-top roof does.

Mazda was also smart to include the same single manual clamp that the driver uses to secure the roof. It takes no time at all to use, and it eliminates dozens of mechanical parts. This is a smart way to design a roof like this.

Mazda MX-5 PRHT Top Down
The hard-top Miata is very easy to operate. Simply reach up and unlatch the single clip above and in front of your right shoulder. Then with foot on brake, on a level surface press the “Top Down” button and hold. By our count, it takes just 9 seconds for the top to completely close. That is a significant number because many traffic lights are just 20 seconds. From my experience, it is a big plus to be able to lower or raise a top in about half the time of a traffic light.

Mazda MX-5 PRHT Top Up
Putting the top up is just as simple and just as quick. It rises up quickly and then you clamp it shut. It can easily be done at a light and once up it is actually fun to drive with the windows open around town. So light rain does not invite debate about whether to close the top or leave it open.

Mazda MX-5 PRHT Sound-proofing
The MX-5 Miata’s design is unusual in a way. There is a large air gap behind the driver on each side that is not insulated. Weight matters in a roadster and I assume that is why Mazda did not take any steps to insulate the car there. It is the same on both the soft and hard-top cars. The result is a fair bit of road noise on the highway. The car is loud. My analysis is that the roof is actually not to blame. It is that area I mentioned that allows the noise into the car. Either way don’t expect the car to be as quiet as a luxury cruiser like a Mercedes SL or E convertible.

My Lexus has had a roof click and pop sound since I owned it that Lexus cannot make go away. I live with it because I primarily use the car top-down. Still, it is unacceptable. I blame the roof’s huge sealing area and complexity. In the Miata, this is not the case. We drove the car top up with the windows both up and down (the glass actually helps push up on the roof to seal it more securely in all convertibles). The roof is utterly silent. No creaks, no rattles, no pops. It is as solid as a bank-vault door. We also took the car through an automated car wash, and there were no leaks at all. Not even a single drip down the side glass.

Miata – Soft Top Versus Hard-Top
As a former owner that worried about vandalism, had trouble keeping the roof clean (Mazda says not to use detergent on it) and saw the roof visibly wear over just three years of very light use, the hard-top is the clear choice. There is no noticeable change in the cars performance and the top makes the Miata a much more user-friendly car.

What Do Other Experts Say About the Miata PRHT?
We reached out to Aaron Turpen, daily contributor here at Torque News, to get his perspective on the car, since he too recently tested it. He said of the Miata PRHT "The Miata's hard top opens and closes relatively fast, is easy to operate, and feels secure once in place." He also mentioned the difficulty one has looking back over one's shoulder in this car, something we noted in the soft-top as well, saying, "...once it's up, your visibility to the rear of the car is almost nil. Of course, it's a convertible, so the top should only be up when absolutely necessary."

Please check out the video we made below. If you have not yet seen the new Torque News YouTube Channel, let us also make the introduction. Going forward, the TN channel will help us to bring you more detail than the printed word can convey in some stories. For a link to an additional video, please click here.

Related Stories:
See the Lexus Hard top Here: Lexus will keep building the IS 250C and IS 350C convertibles into 2015
An emotional review of the 2014 Mazda MX-5 Miata Grand Touring

Video and photography by John Goreham