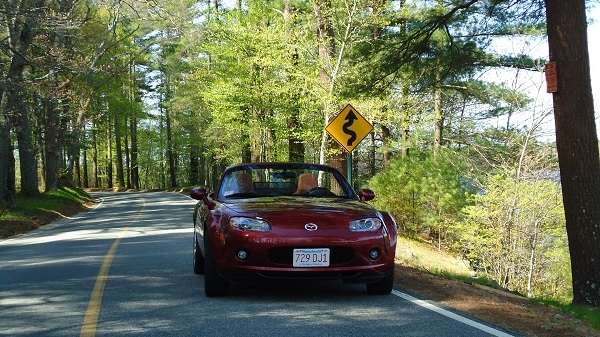 With as much seriousness as the topic deserves, we compare the relative excitement of the Dodge Challenger SRT Hellcat to that of the 2016 Mazda MX-5 Miata.
Advertisement

The new 2016 Mazda MX-5 Miata was confirmed today by Mazda. A page-long press release told us the model year and that it will be on display September 3rd. This announcement comes the same week that we learned that there will be a 707 horsepower Dodge Challenger SRT Hellcat. We ran that figure into the Torque News supercomputer and we came out with the number 4.1. That is about exactly how many new 2016 Mazda Miata engines one would need to create that much power. We are wondering if our readers are 4.1 times as excited about the new Hellcat as they are about the Miata.

Which Kind of Car Nut Are You
The 2016 Mazda MX-5 Miata is my personal choice. I’m a sporty car, touring car, type of car nut. I also like convertibles as fun cars. Our editor, Patrick Rall, represents another type of car nut. He is the kind that likes cars so powerful that they can rotate the rims inside their rear tires upon launch. He actually owns a Dodge that can do that, so he screwed them to the rims. Seriously, it works. Frankly, he seems more excited about the Hellcat than I am about the Miata, but there is a reason for that.

Hellcat Came Out of Nowhere
Dodge dropped the Hellcat out of the sky. Nobody really knows more about Dodge and Chrysler muscle cars than Patrick, and nobody really writes more about them. This Hellcat thing came on like a summer cold. There was a little tickle one day and within a week it was a full blown event. Will it also fade away as quickly?

2016 Miata Has Been 9.5 Years In the Making
The Miata on the other hand has been overdue since about 2011. I’ve been writing about the new Miata for roughly 3 years. Not because that was when it became a topic, but because that is how long I have been doing this. This very month top tier car publications are still publishing cartoon pictures of the Miata on the covers of their magazines (magazines are like Torque News except a man brings a few car stories to your house once a month printed on dead trees, as opposed to 7 men putting up to the minute information on your phone, tablet and laptop a few times per hour Like TN does). Nobody knows what the new 2016 Miata will look like, and nobody knows exactly what it will be packing under the hood. If a 2.0 liter or smaller engine can be called “packing.” The downside to this decade long reveal is that we don’t get the same peak rush. It is more like looking forward to college when you are in junior high.

2016 Miata Is More Exciting Than Dodge Hellcat
Making the case that the Miata is much more exciting than the Dodge Challenger Hellcat is easy for me. Here’s why. My neighbor will never own a Hellcat. I will never see one anywhere except maybe at a car show. Maybe. The Hellcat is also the coolest muscle car ever – right up until the second that Ford or GM make one with 708 horsepower. Then it is just another awesome muscle car. And there are so many…

Real People Will Own Miatas
2016 Mazda Miatas will not only be seen by my neighbors, they will own them. One of my neighbors is on her third Miata (2009). Another in on her second (2007). Two guys I know take their slammed Miatas to the local car cruise nights only to be looked at funny by the 50 guys with 69 Camaros. They will eventually have a 2016, or fourth gen Miata. I might get one too. It is an itch one can actually scratch. Are you really going to go buy a 700 HP Challenger? Why? To take it to a track night at a local dragstrip and get beaten by Tesla or a ‘99 Toyota Supra with a chip and 1,000 horsepower? That’s not fun.

Miata and Hellcat Similarities
Let’s not end on a negative note. Looking for common ground, we see that both the Miata and the Hellcat are rear wheel drive. That alone puts them into a very small minority of cars. These two cars are both related to Fiat too. Fiat owns the Dodge brand (as well as Ferrari) and likes the new Miata so much it is going to rebadge it, add $15K and call it an Alfa Romeo. I think that is pretty much the end of the similarities. Tell me if I missed anything.

Today’s announcement by Mazda ends the debate about the new generation’s model year. This also means that the car went 9.5 years in its current (excellent) form. This new 2016 Miata better be good or Patrick is going to tease me mercilessly.

Better Stories and Hellcat Pictures:
Watch and Listen to the 707hp Dodge Challenger SRT Hellcat in Action
The 2015 Dodge Challenger Hellcat is the Most Powerful American Car - Ever
Mazda shows new MX-5 Miata chassis and reveals details
Can the Tesla Model S beat the Mazda Miata's time around a racetrack?

Main story image of a 2007 Miata by John Goreham

Tim McKenzie wrote on July 6, 2014 - 6:57am Permalink
I like both. I have a 14 SRT, but know that I will never own a new Hellcat. Maybe a used one a few years from now. I'd like to have a new Miata. I currently have an 07 GTI. I like the "go cart" feel of small sports cars, but I also like driving a big muscle car with tons of power. The SRT is basically a "Muscle Grand Tourer." Good for long distance trips, and roasting tires.
Doug wrote on July 16, 2014 - 2:46am Permalink
Opps. Alfa Romeo is misspelled. Not "Alpha". Understandable, though, since they've been away from the US market for such a long time.
Armen Hareyan wrote on July 16, 2014 - 6:00am Permalink
Thanks a lot Doug. We edited it.
Carl wrote on July 17, 2014 - 9:54pm Permalink
They both come with the proper transmission and number of pedals. *hint....the proper number of pedals is greater than two, less than 4*
Jeff Rasp wrote on September 11, 2014 - 3:21pm Permalink
I'm more excited about the 2016 MX5. I just bought a 2014 black club sport and it was a dream come true, 25 years in the making! Nothing like driving around twisting roads, top down, the warmth of the sun on your face and arms and the sound of a highly tuned 4 singing it's song. When I drive the car the only feeling is the pure joy of driving. After seeing the new MX5... I have to say I like the styling of the NC better. It is a cleaner and has an air of simple elegance. Like the original.