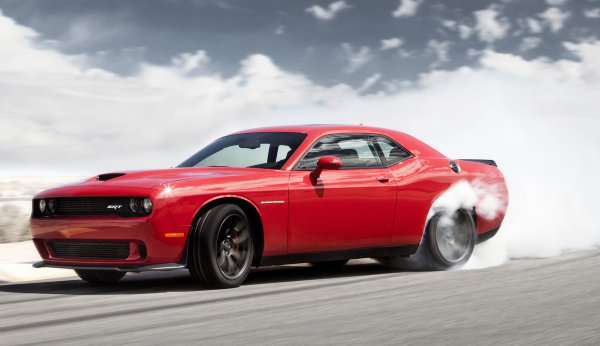 We found out yesterday that the 2015 Dodge Challenger SRT Hellcat would pack 707 horsepower and 650lb-ft of torque from the new 6.2L supercharged Hemi and today, we have a couple videos showing that new monster muscle car motor – giving us a great chance to see and hear the 707hp Challenger in action.
Advertisement

We have known for quite some time now that the 2015 Dodge Challenger SRT Hellcat would offer at least 600 horsepower and at least 575lb-ft of torque. Truthfully, pretty much everyone expected that the Hellcat would easily beat those “at least” figures, but few could have anticipated numbers like 707 horsepower and 650lb-ft of torque. 707 horsepower makes the 2015 Challenger SRT Hellcat the most powerful American production car of all time, the most powerful muscle car of all time and the 6th most powerful production car sold in the world.

With such incredible horsepower figures allowing the 2015 Dodge Challenger to lay claim to such serious titles, the Hellcat Challenger will become the stuff that dreams are made of with so many gearheads young and old drooling over the 707hp beast. Today, we have three videos that are very worthy of being drooled over including the first promotional video from Chrysler, a new video of the Hellcat revving with high res sound and a teaser of the Challenger Hellcat in action on the drag strip.

Needless to say, the sound of these videos are a big part of the fun so make sure that you have your speakers cranked way up before enjoying these Hellcat Challenger videos.

Chrysler Shows Off the 707hp Challenger with Motley Crue
The first video that we are bringing you today is the official video from the Chrysler Group, with Motley Crue’s Kickstart My Heart serving as the soundtrack to one of the most significant announcements in the history of the muscle car world. This clip doesn’t offer any sound clips of the Hellcat, but it is chock full of segments with the Challenger drifting around turns, roasting the tires and just plain looking awesome.

The Hellcat Revving at the Chrysler Proving Grounds
The second video today is a quick clip of the 2015 Dodge Challenger SRT Hellcat idling and revving at Chrysler’s Chelsea Proving Grounds. I captured this short video myself on my GoPro Hero3 so, unlike many of the other Hellcat revving videos online, the audio of the clip doesn’t break up when the blown Hemi hits the higher RPMs.

Car and Driver Shows the Hellcat on the Track
Finally, we have a great video from the folks at Car & Driver, showing the 2015 Dodge Challenger SRT Hellcat doing a nasty burnout and roaring down the drag strip. Before you get too excited, I should point out that the car doesn’t make it to the end of the track before the clip ends so we don’t get to see what it runs – but we get to hear how incredible the 707hp Hemi sounds as it rips away from the starting line.