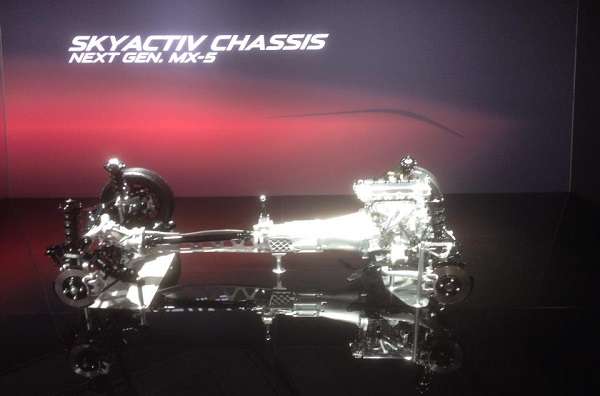 Mazda teased us a little more today, but the overall Miata picture is starting to come into focus.
Advertisement

Mazda revealed the 2015 or 2016 MX-5 Miata SKYACTIVE chassis today at the New York Auto Show. The information leaked shows a plan for the 4rth generation Miata to have the lowest center of gravity of any Miata. The engine is also moved back, which is amazing since the car was nearly a mid-front engine design in its third generation. Finally, the car is on track to shed 220 pounds. If it achieves that goal, and gets just a slight bump in power, the car will be noticeably faster than the current generation.

Mazda has had the new MX-5 Miata in joint development with Fiat now for a few years. The previous Miata from 2006.5 through today’s 2014 version was developed while Mazda had a strong partnership with Ford. However, that car shared almost nothing with any Ford and was (is) made in the Hiroshima plant on its own platform, with its own unique engine. With only about 6,000 units selling annually that cannot be sustained. However, if Fiat’s Alpha Romeo Spider version of the vehicle sells well globally the car may have a bright future.

The Miata has never been about top speed, acceleration numbers, or raw power and the most recent communication by Mazda highlights that. The details provided are very interesting to Miata fans, but likely not to anyone else, even other car enthusiasts. Saying it succinctly, the Miata is all about agility at low and middle speeds, and stability at higher speeds (not high speed). To that end the program seems committed. Please check out the Mazda summary. We could translate it for you, but we trust your abilities.

Not to rain on the parade, but if the Mazda Miata reveal today shows us anything it is that patience is a virtue. The designers are clearly sweating the details, but with no pre-production car to show off now this project is clearly not close to the finish line. Our only suggestion after a close scrutiny of the details is that Mazda move the steering wheel to the other side.

Related Stories:
Buy a 2014 Mazda MX-5 Miata or wait for the all-new 2015?
Mazda MX5 Club Review: More Fun Than You Can Imagine – Until You Drive It