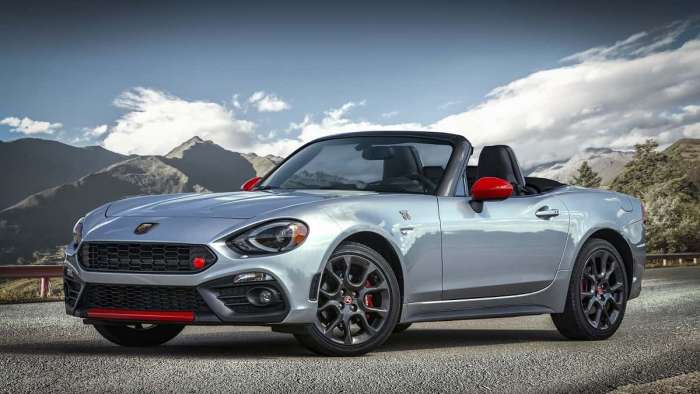 Sayonara Fiat 124 Spider - You Will Be Missed

As Fiat begins to wind down its North American operations, the 124 Spider is discontinued.
Advertisement

Fiat is down to one low volume model in the United States after news this week that FCA US will discontinue the Fiat 124 Spider at the end of the current 2020 model year. Rather than give the 124 Spider a proper sendoff with a special edition or some kind of rally for owners and fans, Fiat instead buried its demise in the 14th paragraph of a press release for the Fiat 500X posted two days before the Christmas Holiday.

Fiat’s full 124 Spider eulogy reads, “For the 2021 model year, the Fiat lineup will feature the Fiat 500X small crossover, which offers unique and functional Italian design, standard all-wheel-drive capability, 9-speed automatic transmission, 30 mpg highway and best-in-class 210 lb-ft of torque. The Fiat 124 Spider and the Fiat 500L will be discontinued after the 2020 model year.”

It was easy to see the writing on the wall. Fiat’s total monthly sales have been down to about 135 units per month in the U.S. as of the most recent reports. By contrast, Mazda is crushing it with the Miata. Its sales are up dramatically over 2019 and grew throughout the unusual period of this past year. Mazda has sold about 8,000 Miatas this year, and its last sales report showed over 600 units sold in chilly November.

The modern 124 Spider from Fiat debuted in late 2015 at the LA Auto show. Thus, the Spider lasted almost exactly five years in the North American market. The Spider offered roadster buyers the underpinnings of a Miata, but with some styling differences that many owners found very significant. Fiat’s turbocharged engines have their fans and their detractors, but once Mazda updated the Miata’s engine in 2018 to its current power of 181 hp, there was no longer any doubt which vehicle offered the better powertrain.

There may be some leftover 124 Spiders for fans looking for a new roadster. Will the 124 become a collectible car? It’s too soon to say. With the NC Miata gaining in popularity and used cars of all types commanding top dollar in today’s disrupted market, any convertible is viewed as valuable.

Sayonara 125 Spider. You will be missed by fans and owners.

John lahanas wrote on January 1, 2021 - 7:56pm Permalink
Firstly Fiat should of produced there own platform sharing is good cut costing all good Have to compete in this economic climate but the customer needed to be Italian and better than even the platform it’s sitting on today, since they went to all the trouble to revive The 124 spider very sad to see it go!