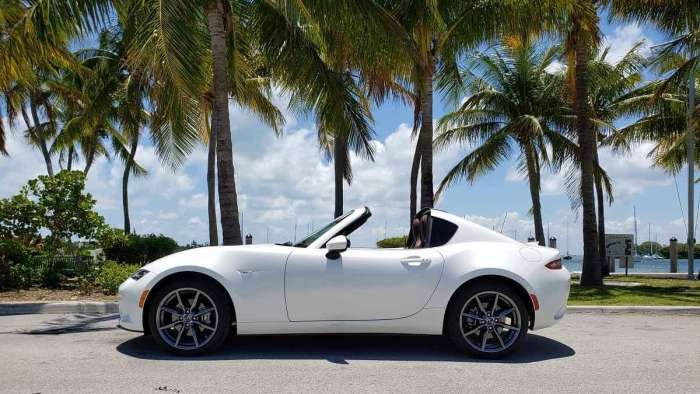 Mazda's MX-5 Miata Sales UP During This Unusual Market Disruption

Mazda's Miata may well be a social distancing tool according to sales data.
Advertisement

To say the American vehicle market has been disrupted is an understatement. Sales have been down across the board at all automakers. New mandates on how and where business can be conducted created problems at both the manufacturing and retail sites. Combined with record unemployment, who would think that a pleasure vehicle like the Mazda MX-5 Miata would be UP in sales. But it is.

Through the end of June, Mazda's sales this year are down overall. As we say above, most automakers are down year to date. However, the Mazda has sold 4,320 Miatas this year so far, up from 3,914 by this time last year. That is a healthy increase of 10.4%. In June, Miata sales were up a whopping 30% compared to June 2019.

Although the Miata is not a vehicle with a short redesign schedule like a commuter car, Mazda has kept the Miata line fresh since its 2016 generation change to the "ND." Mazda has added content, impressively boosted torque and power, and the RF retractable fastback body style was added to the convertible trims.

We don't joke about serious health issues here at Torque News, but in all seriousness, perhaps the Miata is seeing the same sort of bump in sales that consumer goods like bicycles and outdoor equipment like boats and fire pits are seeing. Items like bicycles are sold out everywhere as we all adapt to social distancing activities.

What's your take? How is the Miata up in such a terrible sales environment?

Image by John Goreham - Re-use with permission only.

Walter Docyk wrote on July 5, 2020 - 9:30pm Permalink
With the Miata it’s a great way to stay sane during this social distancing. So much Fun driving a Miata. I bought my GT Version March 1 2020. And drive it almost every day. Every single day someone tells me how awesome the car looks in Soul Red. This is my norm for now. Always recommend the Miata

Tesla-Funded Research Reveals One of The Biggest Mysteries of EV Battery
Tesla Tesla Buyer Nets a Whopping $12,000 Discount After Asking for Reduction
END_OF_DOCUMENT_TOKEN_TO_BE_REPLACED